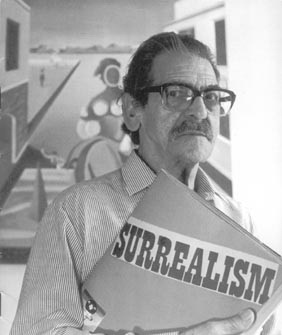 Conroy Maddox (27 December 1912 – 14 January 2005) was an English surrealist painter, collagist, writer and lecturer; and a key figure in the Birmingham Surrealist movement.

He was born in Ledbury, Herefordshire, and discovered surrealism in 1935, spending the rest of his life exploring its potential through his paintings, collages, photographs, objects and texts. Inspired by artists such as Max Ernst, Oscar Domínguez and Salvador Dalí, he rejected academic painting in favour of techniques that expressed the surrealistic spirit of rebellion. Maddox officially joined the British Surrealist Group in 1938.

His creations soon began not only to challenge the conventional view of reality, but also to push pictorial expression to the limits of consciousness. He was even implicated in both scandal and controversy when, during World War II, Scotland Yard suspected him of fifth columnist sabotage and mounted a surprise raid to seize works thought to contain coded messages to the enemy.

Following the war he moved to Balsall Heath and began his most active period. In 1948, he married Nan Burton. They had a daughter and a son together, but had the marriage dissolved in 1955. He died in London, aged 92.