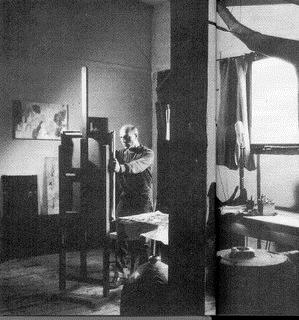 Gherasim Luca was a key member of the Romanian Surrealist movement. He contributed not only with poems, prose and a play, but also with collages ("cubomanies") and Surrealist objects (the so-called "OOO" - "Objectively Offered Objects"). After the communist regime arrived in the late '40s and the group had to shut down its activity, Luca moved to France, where he continued to publish books and make collages, installations, etc. He committed suicide by jumping in the river Seine in 1994.

Gherasim Luca (Romanian pronunciation: [ɟeraˈsim ˈluka]; 23 July 1913 – 9 February 1994) was a French-speaking Surrealist theorist and poet. Born Salman Locker in Romania and also known as Salman Locker, Gherashim Luca, Costea Sar, and Petre Malcoci, he regarded himself as an apatrid. His entire post-Second World War work is written in French. He is frequently cited in the works of Gilles Deleuze and Félix Guattari.

Born in Bucharest the son of a Jewish tailor, Berl Locker (died 1914), he spoke Yiddish, Romanian, German, and French. During 1938, he traveled frequently to Paris where he was introduced to the Surrealist circles. World War II and the official antisemitism in Romania forced him into local exile. During the short pre-Communist period of Romanian independence, he founded a Surrealist artists group, together with Gellu Naum, Paul Păun, Virgil Teodorescu and Dolfi Trost.

His first publications, including poems in French followed. He was the inventor of cubomania and, with Dolfi Trost, the author of the statement "Dialectic of Dialectic" in 1945. Harassed in Romania and caught while trying to flee the country, the self-called étran-juif ("StranJew") finally left Romania in 1952, and moved to Paris through Israel.

There he worked among others with Jean Arp, Paul Celan, François Di Dio and Max Ernst, producing numerous collages, drawings, objects, and text-installations. From 1967, his reading sessions took him to places like Stockholm, Oslo, Geneva, New York City, and San Francisco. The 1988 TV-portrait by Raoul Sanglas, Comment s'en sortir sans sortir, made him famous for a larger readership.

In 1994, he was expelled from his apartment in Montmartre. Luca had spent forty years in France without papers and could not cope. On February 9, at the age of 80, he committed suicide by jumping into the Seine.

Luca initially wrote most of his poetic works in his native Romanian. Two collections of these, Inventatorul Iubirii and Un lup văzut printr-o lupă, published in Bucharest in 1945, were translated into English (The Inventor of Love and Other Works) by Julian and Laura Semilian and published by Black Widow Press in 2009.

With the authorisation of éditions Corti, a forthcoming chapbook of his poems translated by Fiona Sze-Lorrain will be featured in "Poetry International", Issue no. 15, Spring 2010.