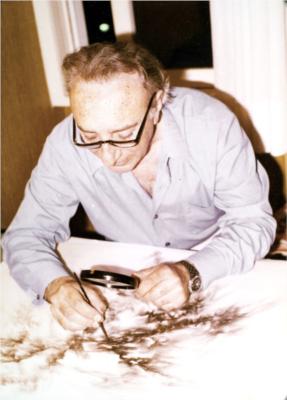 Paul Păun, September 5, 1915 – April 9, 1994 (born Zaharia Herșcovici, and who later in life changed his legal name to Zaharia Zaharia), also signed his work Paul Paon and Paul Paon Zaharia. He was a Romanian and Israeli avant-garde poet and visual artist, who wrote in Romanian and French and produced surrealist and abstract drawings. He was also a medical doctor and surgeon. His work is registered with the ADAGP (Société des Auteurs dans les Arts Graphiques et Plastiques) and the SGDL (Société des Gens de Lettres).

Inspired in his youth by the poetry of Vladimir Mayakovsky and Sergei Yesenin and by the Romanian avant-garde magazine unu, he was a co-founder in the early 1930sof the magazines Alge and Viața Imediată. Păun set himself the goal of making poetry a living experience. He experimented briefly with licentious, ludic themes (and was thus prosecuted for pornography) before turning to Marxism and proletkult aesthetics. Like other avant-garde writers, including his friends Gherasim Luca and Dolfi Trost, he adhered to the then-illegal Romanian Communist Party.

Păun soon developed an interest in surrealism, and became a member of the surrealist group formed at the very start of World War II (alongside Gherasim Luca, Gellu Naum, Trost, and Virgil Teodorescu). This small community survived clandestinely during the war years, when Păun himself was marginalized due to his Jewish ethnicity. It reemerged as a short-lived but very active group after the war, with many of their collective works written in French. Păun also had at the time a noted debut as a surrealist painter and illustrator.

Like other artists and intellectuals in Romania and elsewhere, he found himself disenchanted with Stalinism already in the late 1930s, and subsequently with the post-war Romanian communist regime. Exposed to communist censorship, he stopped publishing or exhibiting his work. He emigrated to Israel when he was already in his late forties, and focused on his medical career, with occasional public contributions to art and literature.

Păun (whose pseudonym is the Romanian for "peacock") was a native of Bucharest. Both his parents were Jewish. The poet's paternal grandfather, Zaharia, was an observant Jew from the Russian Empire who had escaped the draft and was living incognito in Romania; his first name was passed on to his grandson, Zaharia. The family was registered as Herșcovici, which was Păun's first official surname.

Păun, his parents, and his older sister Nini lived in a suburb area just south of Dealul Mitropoliei. Nini was in school with another young Jewish future poet, Maria Banuș, who soon became affectionate friends, and one-time lovers, with Păun (whom she called Pepe, Bebe, or Bebică). In 1932, Banuș described him as: "The solitary, tormented, poseur, rebellious, ironic boy of 17, with his mouth demanding like that of a little girl (Nini's mouth), a large nose, round eyes with overgrown eyelashes, bohemian hair, [and] open-necked shirts". She noted that his family was well educated and spoke French at home, where they maintained a "beautiful atmosphere", and that Păun himself was a good mandolin player.