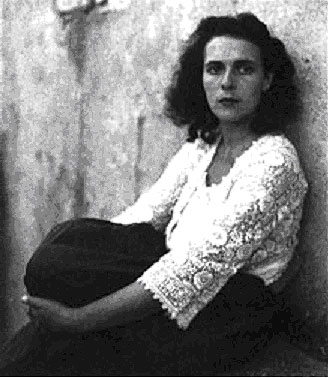 Leonora Carrington OBE (6 April 1917 – 25 May 2011) was an English-born Mexican artist, surrealist painter, and novelist. She lived most of her adult life in Mexico City, and was one of the last surviving participants in the Surrealist movement of the 1930s. Carrington was also a founding member of the Women’s Liberation Movement in Mexico during the 1970s.

Carrington was born in Clayton Green, Chorley, Lancashire, England. Her father was a wealthy textile manufacturer, and her mother, Maureen (née Moorhead), was Irish. She had three brothers: Patrick, Gerald, and Arthur.

Educated by governesses, tutors, and nuns, she was expelled from two schools, including New Hall School, Chelmsford, for her rebellious behaviour, until her family sent her to Florence, where she attended Mrs Penrose's Academy of Art. She also, briefly, attended St Mary's convent school in Ascot. In 1927, at the age of ten, she saw her first Surrealist painting in a Left Bank gallery in Paris and later met many Surrealists, including Paul Éluard. Her father opposed her career as an artist, but her mother encouraged her. She returned to England and was presented at Court, but according to her, she brought a copy of Aldous Huxley's Eyeless in Gaza (1936) to read instead. In 1935, she attended the Chelsea School of Art in London for one year, and with the help of her father's friend Serge Chermayeff, she was able to transfer to Ozenfant Academy in London (1935–38).

She became familiar with Surrealism from a copy of Herbert Read's book, Surrealism (1936), which was given to her by her mother, but she received little encouragement from her family to forge an artistic career. The Surrealist poet and patron Edward James was the champion of her work in Britain; James bought many of her paintings and arranged a show in 1947 for her work at Pierre Matisse's Gallery in New York. Some works are still hanging at James' former family home, currently West Dean College in West Dean, West Sussex. When she returned to Britain, she enrolled in the art school established by the French modernist Amédée Ozenfant.

In 1936, Leonora saw the work of the German surrealist Max Ernst at the International Surrealist Exhibition in London and was attracted to the Surrealist artist before she even met him. In 1937, Carrington met Ernst at a party held in London. The artists bonded and returned together to Paris, where Ernst promptly separated from his wife. In 1938, leaving Paris, they settled in Saint Martin d'Ardèche in southern France. The new couple collaborated and supported each other's artistic development. The two artists created sculptures of guardian animals (Ernst created his birds and Carrington created a plaster horse head) to decorate their home in Saint Martin d'Ardèche. In 1939, Carrington painted a portrait of Max Ernst, as a tribute to their relationship. The portrait was her first Surrealist work, and it was called The Inn of the Dawn Horse. It is now in the Metropolitan Museum of Art. The person in the painting is a cross between a male and a female, who is seated in a room with a rocking horse on the wall.