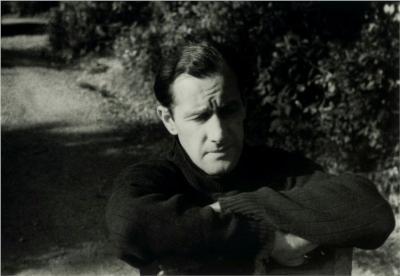 Sidney Nolan was one of the most significant and celebrated figures in Australian art. He received his formal training at the National Gallery of Victoria Art School in Melbourne. In 1938, the collectors John and Sunday Reed became patrons of his work, and, through them, he became a member of the influential avant-garde Melbourne Heide Circle, with Albert Tucker, John Perceval and Joy Hester. While serving in the army from 1942 to 1945, he began to paint the desert landscapes of the Australian Outback in a painterly-realist style. In 1949 he traveled with his second wife Cynthia and her daughter Jinx to Central Australia, documenting the savage effects of the drought on the rural landscape. In addition to landscapes, Nolan often focused on Australian history, depicting legendary characters, particularly the Robin Hood-like outlaw Ned Kelly.

In 1955, Nolan moved to London, but his interest in portraying the Australian landscapes persisted. In London, he was involved with the theater and designed stage sets for a production of Igor Stravinsky’s ballet The Rite of Spring. He was knighted in 1981 and awarded the Order of Merit in 1983. The artist died on November 28, 1992 in London, United Kingdom Today, Nolan’s works are in the collections of the National Gallery of Australia in Canberra, the Tate Gallery in London, The Museum of Modern Art in New York, and the Hirshhorn Museum and Sculpture Garden in Washington, D.C.

Nolan’s style is characterized by its fluid paint handling atop slick surfaces like Masonite and glass. He was influenced by European art, especially by Picasso, Paul Klee, Henri Matisse, and the surrealists.

Sir Sidney Robert Nolan OM, AC (22 April 1917 – 28 November 1992) was one of Australia's leading artists of the 20th century. His oeuvre is among the most diverse and prolific in all of modern art. He is best known for his series of paintings on legends from Australian history, most famously Ned Kelly, the bushranger and outlaw. Nolan's stylised depiction of Kelly's armour has become an icon of Australian art.

Sidney Nolan was born in Carlton, at that time an inner working-class suburb of Melbourne, on 22 April 1917. He was the eldest of four children. His parents, Sidney (a tram driver) and Dora, were both fifth generation Australians of Irish descent. Nolan later moved with his family to the bayside suburb of St Kilda. He attended the Brighton Road State School and then Brighton Technical School and left school aged 14. He enrolled at the Prahran Technical College (now part of Swinburne University), Department of Design and Crafts, in a course which he had already begun part-time by correspondence. From 1933, at the age of 16, he began almost six years of work for Fayrefield Hats, Abbotsford, producing advertising and display stands with spray paints and dyes. From 1934 he attended night classes sporadically at the National Gallery of Victoria Art School.

Nolan was a close friend of the arts patrons John and Sunday Reed, and is regarded as one of the leading figures of the so-called "Heide Circle" that also included Albert Tucker, Joy Hester, Arthur Boyd and John Perceval. Boyd and Perceval were members of the Boyd artistic family who were centered at "Open Country", Murrumbeena.

In 1938, he met and married his first wife Elizabeth, but his marriage soon broke up because of his increasing involvement with the Reeds. He joined the Angry Penguins in the 1940s, after deserting from the army during World War II; indeed he was an editor of the Angry Penguins magazine and painted the cover for the Ern Malley edition published in June 1944. The Ern Malley hoax poems were seen by Nolan and Sunday Reed as being uncannily prescient in touching on their own personal circumstances. The Malley poems remained a real presence to him throughout his life. He painted and drew literally hundreds of Malley-themed works and in 1975 said it inspired him to paint his first Ned Kelly series: "It made me take the risk of putting against the Australian bush an utterly strange object."

He lived for some time at the Reeds' home, "Heide" outside Melbourne (now the Heide Museum of Modern Art). Here he painted the first of his famous, iconic "Ned Kelly" series, reportedly with input from Sunday Reed. Nolan also conducted an open affair with Sunday Reed at this time although he married John Reed's sister, Cynthia in 1948, after Sunday refused to leave her husband. He had lived in a ménage à trois with the Reeds for several years and although he spoke to them, and visited Heide, but once again in their lifetimes, the years there together have been seen as a dominating factor in the subsequent lives of them all.