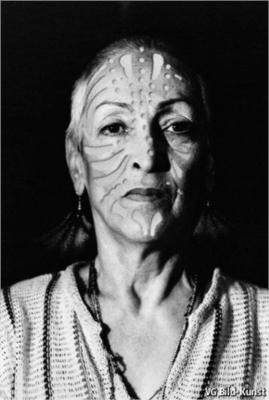 Méret Elisabeth Oppenheim (6 October 1913 – 15 November 1985) was a German-born Swiss Surrealist artist and photographer. Oppenheim was a member of the Surrealist movement along with André Breton, Luis Buñuel, Max Ernst, and other writers and visual artists. Besides creating art objects, Oppenheim also famously appeared as a model for photographs by Man Ray, most notably a series of nude shots of her interacting with a printing press.

Méret Oppenheim was born on 6 October 1913 in Berlin. Oppenheim is named after Meretlein, a wild child who lives in the woods, from the novel Green Henry by Gottfried Keller. Oppenheim had two siblings, a sister named Kristin (born 1915) and a brother named Burkhard (born 1919). Her father, a German-Jewish doctor, was conscripted into the army at the outbreak of war in 1914. Consequently, Oppenheim and her mother, who was Swiss, moved to live with Oppenheim's maternal grandparents in Delémont, Switzerland. In Switzerland, Oppenheim was exposed to a plethora of art and artists from a young age. Oppenheim was also inspired by her aunt, Ruth Wenger, especially by Wenger's devotion to art and her modern lifestyle. During the late 1920s, Oppenheim was further exposed to different artworks connected to Modernism, Expressionism, Fauvism, and Cubism.

By 1928, Oppenheim was introduced to the writings of Carl Jung through her father and was inspired to record her dreams. Her dreams would serve as important sources for much of her art throughout her life. The work of Paul Klee, the focus of a retrospective at the Kunshalle Basel in 1929, provided another strong influence on Oppenheim, arousing her to the possibilities of abstraction.

In May 1932, at the age of 18, Oppenheim moved to Paris and sporadically attended the Académie de la Grande Chaumière. In 1933, Oppenheim met Hans Arp and Alberto Giacometti. After visiting her studio and seeing her work, Arp and Giacometti invited her to participate in the Surrealist exhibition in the “Salon des Surindépendants,” held in Paris between 27 October and 26 November. Oppenheim later met André Breton and began to participate in meetings at the Café de la Place Blanche with the Surrealist circle. Shortly after she began to attend meetings regularly with Breton and other acquaintances, Oppenheim’s circle was joined by other Surrealist artists such as Marcel Duchamp, Max Ernst, and Man Ray. The conceptual approach favored by Marcel Duchamp, Max Ernst, and Francis Picabia became important to her work.

In 1936, Oppenheim had her first solo exhibition in Basel, Switzerland, at the Galerie Schulthess. She continued to contribute to Surrealist exhibitions until 1960. Many of her pieces consisted of everyday objects arranged to allude to female sexuality and feminine exploitation by the opposite sex. Oppenheim’s paintings focused on the same themes. Her abundant strength of character and her self-assurance informed each work she created, conveying a certain comfortable confrontation with life and death. Her originality and audacity established her as a leading figure in the Surrealist movement.

Méret Oppenheim's first one-woman exhibition in the Galerie Schulthess, Basel (1936) featured surrealist objects. In 1937, Oppenheim returned to Basel and this marked the start of her artistic block. She struggled after she met success and worried about her development as an artist. Méret Oppenheim usually worked in spontaneous bursts and at times destroyed her work. Oppenheim took a hiatus from her artistic career in 1939 after an exhibition at the Galerie René Drouin started by Rene Drouin in Paris. In the exhibition she was featured alongside many artists, including Leonor Fini and Max Ernst. She did not share any art with the public again until the 1950s. Oppenheim then reverted to her "original style" and based her new artworks on old sketches and earlier works and creations.