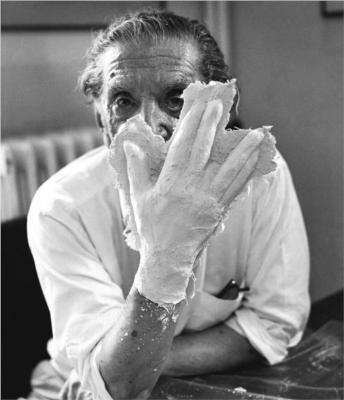 Dino was born on March 23, 1913, in Istanbul into an art-loving family. He started drawing and painting at a young age influenced by his family. As a child he lived in Geneva, Switzerland and France for several years with his parents, returning to Istanbul in 1925. Dino began his secondary education at the American highschool Robert College of Istanbul, but dropped out to devote himself to painting, drawing and writing. His articles and cartoons were soon being published in newspapers and magazines, and in 1933 he and five other young innovative painters founded the “Group D”, which held several exhibitions of their work. At around the same time, he illustrated Nazım Hikmet’s books of poetry.

In 1933, the Soviet director Sergei Yutkevich, who had made a film about Ankara, invited Dino to the Lenfil Studios in Leningrad, and with Atatürk's encouragement Dino accepted. In Leningrad, he worked as a scenery designer and assistant director at several film studios, and directed a film called "Miners" in Moscow, Kiev and Odessa. Shortly after returning to Turkey, he went to Paris, France where he worked from 1937 to 1939, meeting such famous artists as Gertrude Stein, Tristan Tzara and Picasso.

Following his return to Istanbul again, he participated in the famous "Harbor Exhibition", consisting of paintings of the city's dockworkers and fishermen by well-known Turkish painters of the time. The exhibition aroused widespread public interest, and that year Dino was asked to design the Turkish pavilion at the 1939 New York World's Fair. Meanwhile, he published articles and cartoons in several of the foremost magazines of that time, studying a new approach to realism together with his elder brother poet Arif Dino.

During World War II, he did drawings inspired by the conflict, but his treatment of political subjects in wartime incurred official displeasure, and in 1941 the martial law command of Istanbul exiled him and his elder brother to southeastern Anatolia, where their grandfather had been a governor before. These years of exile until 1945 were artistically very productive for Dino. While his young wife Güzin Dino taught French at Adana High School, he worked for a local newspaper, TurkSozu, producing articles and drawings that illustrated with poetic realism of the hard lives and working conditions of agricultural laborers in the region. It was here that he wrote his plays "Bald" and "Heirs", and began doing sculpture. In 1951, he was allowed to leave Turkey. So he went first to Rome, Italy where he stayed nine months, but settled then in Paris in 1952.

Within a short time, the home of Guzin and Abidin Dino in Paris became the haunt of many famous artists and writers. The couple first moved into the studio on the top floor of Max Ernst's apartment on the quay of Saint-Michel, and later to a small flat in L'Eure.

Their foreign and Turkish friends, including Nazım Hikmet, Yaşar Kemal, Ahmet Hamdi Tanpinar and Melih Cevdet, found the opportunity to meet one another at the Dino’s home. The Dinos were also always ready with a helping hand for young Turkish painters and students in Paris, introducing them to world-famous masters, and assisting them to get established.