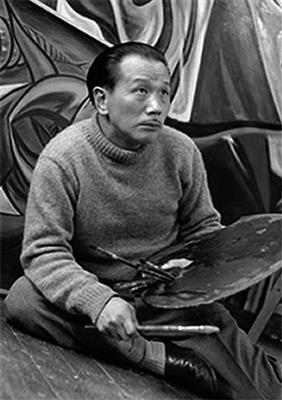 Taro Okamoto is the son of cartoonist Ippei Okamoto and writer Kanoko Okamoto. He was born in Takatsu village, in Kawasaki, Kanagawa prefecture.

He studied at Panthéon-Sorbonne in the 1930s, and created many works of art after World War II. He was a prolific artist and writer until his death.

Among the artists Okamoto associated with during his stay in Paris were André Breton (1896–1966), the leader of Surrealism, and Kurt Seligmann (1900–62), a Swiss Surrealist artist, who was the Surrealists' authority on magic and who met Okamoto's parents, Ippei and Kanoko Okamoto, during a trip to Japan in 1936. Okamoto also associated with Pablo Picasso, Man Ray, Robert Capa and Capa's partner, Gerda Taro, who adopted Okamoto's first name as her last name.

In the 1950s, he received a commission from the Oriental Nakamura department store in Nagoya to create a large mural on the main facade of their flagship store. The mural was demolished after Oriental Nakamura was bought by Mitsukoshi in the 1970s. In 1964 Tarō Okamoto published a book titled Shinpi Nihon (Mysteries in Japan). His interest in Japanese mysteries was sparked off by a visit he made to the Tokyo National Museum. After having become intrigued by the Jōmon pottery he found there, he journeyed all over Japan in order to research what he perceived as the mystery which lies beneath Japanese culture, and then he published Nihon Sai-hakken－Geijutsu Fudoki (Rediscovery of the Japan－Topography of Art).

One of his most famous works, Tower of the Sun, became the symbol of Expo '70 in Suita, Osaka, 1970. It shows the past (lower part), present (middle part), and future (the face) of the human race. It still stands in the center of the Expo Memorial Park.

After being lost for 30 years in Mexico, on November 17, 2008, his mural "The Myth of Tomorrow" (明日の神話, asu no shinwa), depicting the effects of an atomic bomb, was unveiled in its new permanent location at Shibuya Station, Tokyo. In it, a human figure burns and others appear to run from flames. The work was made for the Hotel de Mexico in Mexico city by Manuel Suarez y Suarez.

Kawasaki, his hometown, has constructed the Taro Okamoto Museum of Art in Tama Ward, northwest of the city. His studio/home is also open to visitors and is located in Aoyama in Tokyo.