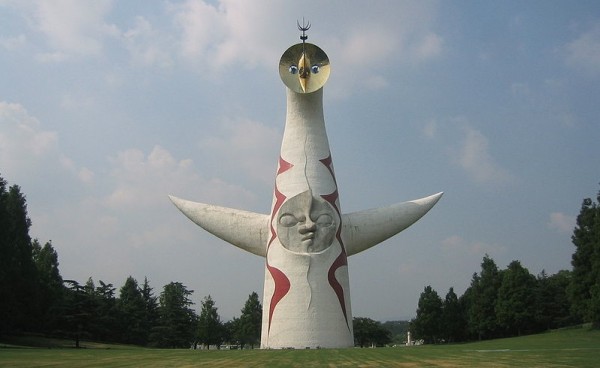 Tower of the Sun

The Tower of the Sun (太陽の塔, Taiyō no Tō) is a building created by Japanese artist Tarō Okamoto. It was known as the symbol of Expo '70 and currently is preserved and located in the Expo Commemoration Park in Suita, Osaka, Japan. The tower has three faces on its front and back.

Originally, the tower was built for Expo '70 and housed in the Festival Plaza building known as "Big Roof" designed by Japanese architect Kenzo Tange. The tip of the tower projected out of the Big Roof's ceiling due to the height of the building. After the completion of the tower projecting through the Big Roof, a Japanese science fiction writer, Sakyo Komatsu, looked at it and said he associated it with a sexual description in a Japanese novel, Season of the Sun, where a character broke through a sliding paper door. The creator of the tower, Taro Okamoto, heard about it, and named the tower as the "Tower of the Sun".

The tower was open to the public and visitors could enter inside during the expo, yet it was closed after the event. The gallery inside displayed a huge artwork called the "Tree of Life", which represented the evolution of creatures. The Tsuburaya Productions partly produced the artwork. The Big Roof housing the tower was removed in 1979, causing the tower to be exposed for a long time. The tower has gradually deteriorated. Once a claim to demolish it arose, yet it was decided to be preserved and repair work began in November 1994, ending in March 1995.

On October 11 and 12, 2003, the inside of the Tower of the Sun was opened to a selected 1,970 people (the figure was chosen for the year the expo was held). Prior to the opening, over 24,000 people applied for it so the Commemorative Organization for the Japan World Exposition '70 made a decision to open the tower again in November and December in the same year. The event to release the inside irregularly continued, and over 40,000 people in total visited the inside of the tower until October 2006. Due to the repair and renovation for the 40th anniversary event of the Expo '70 in 2010, access to the Tower's interior was closed again. After additional repairs it was to be permanently open to the public starting in 2014. As of December, 2015, the Tower's interior is not open to the public.

The tower's height is 70 metres, the diameter at the base is 20 metres, and each of the two arms is 25 metres long. The tower has currently three faces, two faces on the front, and a face in the back. The face located at the top, whose diameter is 11 metres, represents the future. An antenna attached to it works as a conductor. In the eyes of the face, Xenon arc lamps were used during the expo, however they became decrepit and broken down after the expo. On September 25, 2004, new lights were installed next to the old ones and lit to advertise the Expo 2005. A face between two arms represents the present, and a black face on the rear of the tower is the sun of the past. Originally another face, "Sun of the Underworld" was located on the basement floor, yet currently it has been moved to an unknown location. The jagged red paintings on the front of the tower represent thunder.