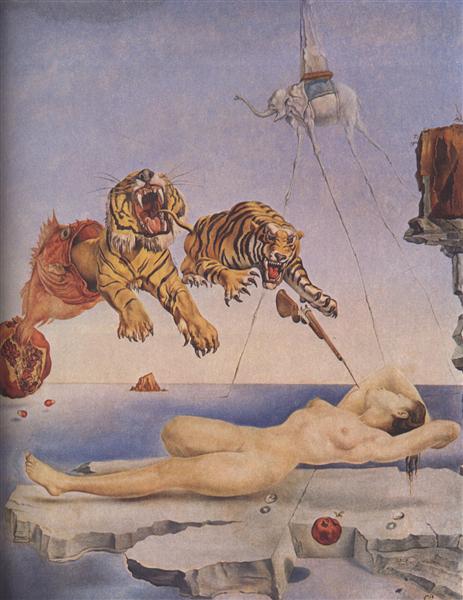 Dream Caused by the Flight of a Bee around a Pomegranate a Second before Awakening, 1944 - Salvador Dali

The Surrealists sought to channel the unconscious as a means to unlock the power of the imagination. Disdaining rationalism and literary realism, and powerfully influenced by psychoanalysis, the Surrealists believed the rational mind repressed the power of the imagination, weighing it down with taboos. Influenced also by Karl Marx, they hoped that the psyche had the power to reveal the contradictions in the everyday world and spur on revolution. Their emphasis on the power of personal imagination puts them in the tradition of Romanticism, but unlike their forebears, they believed that revelations could be found on the street and in everyday life. The Surrealist impulse to tap the unconscious mind, and their interests in myth and primitivism, went on to shape many later movements, and the style remains influential to this today.

Surrealism grew out of the Dada movement, which was also in rebellion against middle-class complacency. Artistic influences, however, came from many different sources. The most immediate influence for several of the Surrealists was Giorgio de Chirico, their contemporary who, like them, used bizarre imagery with unsettling juxtapositions. They were also drawn to artists from the recent past related to Primitivism, and Symbolism, who were interested in naive, or fantastical imagery, such as Gustave Moreau, Arnold Bocklin, Odilon Redon, and Henri Rousseau. Even artists from as far back as the Renaissance, such as Giuseppe Arcimboldo and Hieronymous Bosch, provided inspiration in so far as these artists were not overly concerned with aesthetic issues involving line and color, but instead felt compelled to create what Surrealists thought of as the "real."

The Surrealist movement began as a literary group strongly allied to Dada, emerging in the wake of the collapse of Dada in Paris, when André Breton's eagerness to bring purpose to Dada clashed with Tristan Tzara's anti-authoritarianism. Breton, who is occasionally described as the 'Pope' of Surrealism, officially founded the movement in 1924 when he wrote The Surrealist Manifesto. However, the term "surrealism," was first coined in 1917 by Guillaume Apollinaire when he used it in program notes for the ballet Parade, written by Pablo Picasso, Leonide Massine, Jean Cocteau, and Erik Satie.

Around the same time that Breton published his inaugural manifesto, the group began publishing the journal La Révolution surréaliste, which was largely focused on writing, but also included art reproductions by artists such as de Chirico, Max Ernst, André Masson, and Man Ray. Publication continued until 1929.

The Bureau for Surrealist Research or Centrale Surréaliste was also established in Paris in 1924. This was a loosely affiliated group of writers and artists who met and conducted interviews to "gather all the information possible related to forms that might express the unconscious activity of the mind." Headed by Breton, the Bureau created a dual archive: one that collected dream imagery and another that collected materials related to social life. At least two people manned the office each day - one to greet visitors and the other to write down the observations and comments of the visitors that then became part of the archive. In January 1925, the Bureau officially published its revolutionary intent that was signed by 27 people, including Breton, Ernst, and Masson.

Surrealism shared much of the anti-rationalism of Dada. The original Parisian Surrealists used art as a reprieve from violent political situations and to address the unease they felt about the world's uncertainties. By employing fantasy and dream imagery, artists generated creative works in a variety of media that exposed their inner minds in eccentric, symbolic ways, uncovering anxieties and treating them analytically through visual means.

Though Surrealism originated in France, strains of it can be identified in art throughout the world. Particularly in the 1930s and 1940s, many artists were swept into its orbit as increasing political upheaval and a second global war encouraged fears that human civilization was in a state of crisis and collapse. The emigration of many Surrealists to the Americas during WWII spread their ideas further. Following the war, however, the group's ideas were challenged by the rise of Existentialism, which, while also celebrating individualism, was more rationally based than Surrealism. In the arts, the Abstract Expressionists incorporated Surrealist ideas and usurped their dominance by pioneering new techniques for representing the unconscious. Breton became increasingly interested in revolutionary political activism as the movement's primary goal. The result was the dispersal of the original movement into smaller factions of artists. The Bretonians, such as Roberto Matta, believed that art was inherently political. Others, like Yves Tanguy, Max Ernst, and Dorothea Tanning, remained in America to separate from Breton. Salvador Dalí, likewise, retreated to Spain, believing in the centrality of the individual in art.

In 1936, the Museum of Modern Art in New York staged an exhibition entitled Fantastic Art, Dada, Surrealism, and many American artists were powerfully impressed by it. Some, such as Jackson Pollock, began to experiment with automatism, and with imagery that seemed to derive from the unconscious - experiments which would later lead to his "drip" paintings. Robert Motherwell, similarly, is said to have been "stuck between the two worlds" of abstraction and automatism.

Largely because of political upheaval in Europe, New York rather than Paris became the emergent center of a new vanguard, one that favored tapping the unconscious through abstraction as opposed to the "hand-painted dreams" of Salvador Dalí. Peggy Guggenheim's 1942 exhibition of Surrealist-influenced artists (Rothko, Gottlieb, Motherwell, Baziotes, Hoffman, Still, and Pollock) alongside European artists Miró, Klee, and Masson, underscores the speed with which Surrealist concepts spread through the New York art community.

The Surrealists have often been depicted as a tightly knit group of men, and their art often envisioned women as wild "others" to the cultured, rational world. Work by feminist art historians has since corrected this impression, not only highlighting the number of women Surrealists who were active in the group, particularly in the 1930s, but also analyzing the gender stereotypes at work in much Surrealist art. Feminist art critics, such as Dawn Ades, Mary Ann Caws, and Whitney Chadwick, have devoted several books and exhibitions to this subject.

While most of the male Surrealists, especially Man Ray, Magritte, and Dalí, repeatedly focused on and/or distorted the female form and depicted women as muses, much in the way that male artists had for centuries, female Surrealists such as Claude Cahun, Lee Miller, Leonora Carrington, and Dorothea Tanning, sought to address the problematic adoption of Freudian psychoanalysis that often cast women as monstrous and lesser. Thus, many female Surrealists experimented with cross-dressing and depicted themselves as animals or mythic creatures.

Interestingly, many notable female Surrealists were British. Examples include Eileen Agar, Ithell Colquhoun, Edith Rimmington, and Emmy Bridgwater. Particular to the British interpretation of Surrealist ideology was an ongoing exploration of human relations with their surrounding natural environment and most prominently, with the sea. Alongside Agar, Paul Nash developed an interest in the object trouvé, usually in the form of items collected from the beach. The focus on the border where land meets the sea, and where rocks anthropomorphically resemble people struck a chord with British identity and more generally, with Surrealist principles of reconciling and uniting opposites.

The International Surrealist Exhibition (1936) held in London was a particular catalyst for many British artists. Headed by Roland Penrose and Herbert Read, the movement thrived in Britain, creating the international icons Leonora Carrington and Lee Miller, and also spurring on the practice of another important circle of artists surrounding Ben Nicholson, Barbara Hepworth, and Henry Moore. Overall, the privileging of an eccentric imagination and essential rejection of standardized and rational modes of doing things resonated well from the outset. This golden period for art in general in the UK, and more specifically the legacies of British Surrealism continue to influence the country’s art practice today.