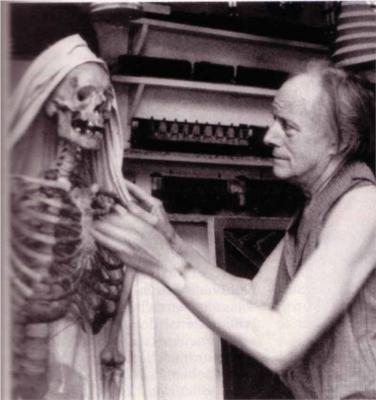 Paul Delvaux in his studio - photo by Marcel Broodthaers

Paul Delvaux was a Belgian artist known for his oil paintings that merge the elements of Surrealism with classical forms. A reoccurring theme in Delvaux’s work are nude women, in various positions, wandering silently through classical buildings or train stations, combined with motifs such as skeletons, characters from Jules Verne novels, men wearing bowler hats, and other unexpected objects. Deeply influenced by the works of Giorgio de Chirico and René Magritte, Delvaux’s scenes are characterized by long shadows and a distinct sense of anxiety and unease.

Delvaux was interested in exploring humanity and the subconscious. While he initially found inspiration in Expressionism, his mature style was mainly influenced by the Surrealist movement. During the 1930’s Delvaux began exploring a technique Surrealists developed for making poetry. This technique of convulsive joining, similar to automatism but with a higher level of order, was practiced by Surrealists in order to create collage poetry by cutting and reconfiguring the text. Delvaux pursued the idea of finding a visual equivalent to this technique. He achieved this by merging together subjects, places, and ideas that were unrelated to each other. In doing so, he created bizarre new worlds infused with a strong sense of nostalgia, alienation, and a feeling of sadness for the loss of childlike imaginative freedom.

Despite the fact that Delvaux maintained a professional and personal relationship with many Surrealist painters including André Breton, René Magritte, and Paul Eluard, he remained independent and did not consider himself a Surrealist. Moreover, Delvaux claimed to find Freud's psychoanalytic ideas, that shaped the Surrealist movement, unimportant for his work. After his visit to Italy in the late 1930’s, architecture became much more than just a background in his paintings. The classical buildings he came across on his voyage, the city squares, and his lifelong obsession of train stations became a stage for his mysterious scenes, essential to achieving their specific moods. The contrasting paleness of the naked bodies against the architecture brought to light contradictory elements: public and private sphere, living bodies and the cold inanimate stone, and the estranged and the erotic side of his painted figures. This contrast was even more enhanced with the appearance of a man wearing a bowler hat (influence of R. Magritte) alongside the nudes.

The post-war years saw the re-emergence of Delvaux‘s childhood obsessions. His fear of skeletons turned into fascination. As well as his nudes, Delvaux purposely made the skeletons appear out of place in his unusual framework. He showed them in lifelike poses, reclining or lingering, believing that they brought a sense of life and time when connected with his imaginative settings. His childhood love of trams and trains also appeared in many of his later works, so much so, that it earned him the nickname "The Painter of Stations."

In later life, Delvaux received many distinctions while still continuing to execute important works. From the early 1950’s he created a number of large murals in Belgium (at the Palais des Congrès, at the Liège Institute of Zoology, and in the Bourse station in Brussels). Delvaux was named the president and director of the Académie Royale des Beaux-Arts in Belgium and in 1973, he was awarded the Rembrandt Prize of the Johann Wolfgang von Goethe Stiftung. In his final years, his vision became so poor that he was forced to give up painting.

Paul Delvaux (French: [dɛlvo]; 23 September 1897 – 20 July 1994) was a Belgian painter famous for his paintings of female nudes. He was influenced by the works of Giorgio de Chirico, and was also briefly associated with surrealism.

Delvaux was born in Wanze in the Belgian province of Liège, the son of a lawyer. The young Delvaux took music lessons, studied Greek and Latin, and absorbed the fiction of Jules Verne and the poetry of Homer. All of his work was to be influenced by these readings, starting with his earliest drawings showing mythological scenes. He studied at the Académie Royale des Beaux-Arts in Brussels, albeit in the architecture department owing to his parents' disapproval of his ambition to be a painter. Nevertheless, he pursued his goal, attending painting classes taught by Constant Montald and Jean Delville. The painters Frans Courtens and Alfred Bastien also encouraged Delvaux, whose works from this period were primarily naturalistic landscapes. He completed some 80 paintings between 1920 and 1925, which was the year of his first solo exhibition.

Delvaux's paintings of the late 1920s and early 1930s, which feature nudes in landscapes, are strongly influenced by such Flemish Expressionists as Constant Permeke and Gustave De Smet. A change of style around 1933 reflects the influence of the metaphysical art of Giorgio de Chirico, which he had first encountered in 1926 or 1927. In the early 1930s Delvaux found further inspiration in visits to the Brussels Fair, where the Spitzner Museum, a museum of medical curiosities, maintained a booth in which skeletons and a mechanical Venus figure were displayed in a window with red velvet curtains. This spectacle captivated Delvaux, supplying him with motifs that would appear throughout his subsequent work. In the mid-1930s he also began to adopt some of the motifs of his fellow Belgian René Magritte, as well as that painter's deadpan style in rendering the most unexpected juxtapositions of otherwise ordinary objects.

Delvaux acknowledged his influences, saying of de Chirico, "with him I realized what was possible, the climate that had to be developed, the climate of silent streets with shadows of people who can't be seen, I've never asked myself if it's surrealist or not." Although Delvaux associated for a period with the Belgian surrealist group, he did not consider himself "a Surrealist in the scholastic sense of the word." As Marc Rombaut has written of the artist: "Delvaux ... always maintained an intimate and privileged relationship to his childhood, which is the underlying motivation for his work and always manages to surface there. This 'childhood,' existing within him, led him to the poetic dimension in art."

The paintings Delvaux became famous for usually feature numbers of nude women who stare as if hypnotized, gesturing mysteriously, sometimes reclining incongruously in a train station or wandering through classical buildings. Sometimes they are accompanied by skeletons, men in bowler hats, or puzzled scientists drawn from the stories of Jules Verne. Delvaux would repeat variations on these themes for the rest of his long life, although some departures can be noted. Among them are his paintings of 1945-47, rendered in a flattened style with distorted and forced perspective effects, and the series of crucifixions and deposition scenes enacted by skeletons, painted in the 1950s.