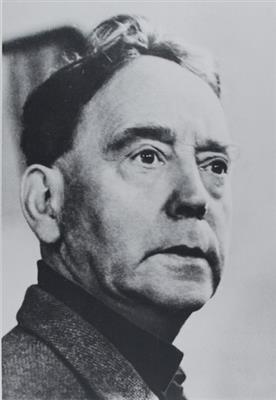 John
Heartfield's name is synonymous with his 1930s anti-fascist photomontages. He became known for his one-man battle against Hitler due to his concentrated critique of this dictator as a liar, backed by the big industrialists.

Montage, for Heartfield, was a vernacular art form, readily used for propaganda and commercial purposes. The Berlin Dadaists used photomontage to rupture the commercialized media's view of reality by dismantling it into fragmented parts. Cubism dismantled the mimetic representation in art. Similarly, Heartfield's violently cut and pasted fragments with their rough edges exposed the media's realistic description of the world as a mimetic illusion. To call the authenticity of reality into question was to show the masses how they had traded in their own perception of reality for the media's view. Regrettably, these Dadaists lacked a popular audience.

Heartfield's agitational method, equated with the worker photography movement's notion of 'photo as a weapon,' aimed to visualize the realities that lay behind the agitation for war or whatever cause the government persuaded the citizens to back. Heartfield's seamlessly sutured photomontages show how the photographic medium was mere artifice. The montaged interplay of animal and human, animate and inanimate, technological, and 'natural' are revealed as the hidden structure in mechanical reproductions under industrial capitalism.

Heartfield caused the times to speak for themselves through cut-out fragments from everyday materials, such as advertisements, newspapers, and illustrations. He provoked reality to snap its own picture through excerpts taken from popular mass media products, as a variation on a cameraless photographic process.

Only recently has Heartfield's work been studied on its own terms, as progressive graphic design. His formative training in advertising and experiences with Dada theatricality provided him with the visual tools to affect and persuade viewers to action and critical thinking. Heartfield's pro-communist, anti-capitalist photomontages emerge in a moment of war and revolution, and in dialogue with the late Weimar Republic's commodity culture. His provocative photomontages aroused both critical acclaims as well as a controversy at the time - especially famous are his anti-fascist montages, for which he was persecuted by the Nazis and spied on by Gestapo agents. The capacity of Heartfield's photomontages to provide a technique through which to conceive alternative views of reality is his contribution to artistic practice across the media arts.

John Heartfield (born Helmut Herzfeld; 19 June 1891 – 26 April 1968) was a German visual artist who pioneered the use of art as a political weapon. Some of his most famous photomontages were anti-Nazi and anti-fascist statements. Heartfield also created book jackets for book authors, such as Upton Sinclair, as well as stage sets for contemporary playwrights, such as Bertolt Brecht and Erwin Piscator.


John Heartfield was born Helmut Herzfeld on 19 June 1891 in Berlin-Schmargendorf, Berlin under the German Empire. His father was Franz Herzfeld, a socialist writer, and his mother was Alice (née Stolzenburg), a textile worker and political activist.


In 1899, Helmut, his brother Wieland Herzfelde, and his sisters Lotte and Hertha were abandoned in the woods by their parents. The four children went to live with an uncle in the small town of Aigens.


In 1908, he studied art in Munich at the Royal Bavarian Arts and Crafts School. Two commercial designers, Albert Weisgerber and Ludwig Hohlwein, were early influences.


While living in Berlin, he began styling himself "John Heartfield," an anglicisation of his German name, to protest against anti-British fervour sweeping (Germany) during the First World War, during which Berlin street crowds commonly shouted "Gott strafe England!" ("May God punish England!").


During the same year, Heartfield, his brother Wieland and George Grosz launched publishing house Malik-Verlag in Berlin. In 1916, he and George Grosz had experimented with pasting pictures together, a form of art later named photomontage, and which would be a central characteristic of their works.


In 1917, Heartfield became a member of Berlin Club Dada. Heartfield would later become active in the Dada movement, helping to organise the Erste Internationale Dada-Messe (First International Dada Fair) in Berlin in 1920. Dadaists were provocateurs who disrupted public art gatherings and ridiculed the participants. They labeled traditional art trivial and bourgeois.


In 1919, Heartfield was dismissed from the Reichswehr film service because of his support for the strike that followed the assassination of Karl Liebknecht and Rosa Luxemburg. With George Grosz, he founded Die Pleite, a satirical magazine.


Heartfield met Bertolt Brecht in 1924, and became a member of a circle of German artists that included Brecht, Erwin Piscator, Hannah Höch, and a host of others.


Though he was a prolific producer of stage sets and book jackets, Heartfield's main form of expression was photomontage. Heartfield produced the first political photomontages. He mainly worked for two publications: the daily Die Rote Fahne and the weekly Arbeiter-Illustrierte-Zeitung (AIZ), the latter of which published the works for which Heartfield is best remembered. He also built theatre sets for Erwin Piscator and Bertolt Brecht.


During the 1920s, Heartfield produced a great number of photomontages, many of which were reproduced as dust jackets for books such as his montage for Upton Sinclair's The Millennium.


It was through rotogravure, an engraving process whereby pictures, designs, and words are engraved into the printing plate or printing cylinder, that Heartfield's montages, in the form of posters, were distributed in the streets of Berlin between 1932 and 1933, when the Nazis came to power.