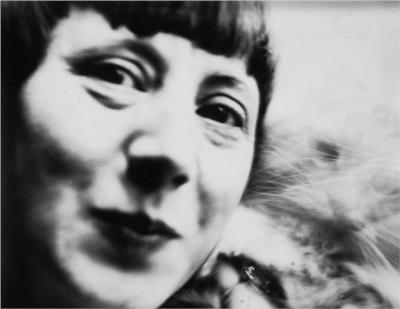 Hannah Höch (German: [hœç]; November 1, 1889 – May 31, 1978) was a German Dada artist. She is best known for her work of the Weimar period, when she was one of the originators of photomontage. Photomontage, or fotomontage, is a type of collage in which the pasted items are actual photographs, or photographic reproductions pulled from the press and other widely produced media.

Höch's work was intended to dismantle the fable and dichotomy that existed in the concept of the "New Woman": an energetic, professional, and androgynous woman, who is ready to take her place as man's equal. Her interest in the topic was in how the dichotomy was structured, as well as in who structures social roles.

Other key themes in Höch's works were androgyny, political discourse, and shifting gender roles. These themes all interacted to create a feminist discourse surrounding Höch's works, which encouraged the liberation and agency of women in Weimar Germany and today.

Hannah Höch was born Anna Therese Johanne Höch in Gotha, Germany. Although she attended school, domesticity took precedence in the Höch household. In 1904, Höch was taken out of the Höhere Töchterschule in Gotha to care for her youngest sibling, Marianne. In 1912 she began classes at the School of Applied Arts in Berlin under the guidance of glass designer Harold Bergen. She had chosen the curriculum in glass design and graphic arts, rather than fine arts, to please her father.

In 1914, at the start of World War I, she left the school and returned home to Gotha to work with the Red Cross. In 1915 she returned to school, entering the graphics class of Emil Orlik at the National Institute of the Museum of Arts and Crafts. Also in 1915, Höch began an intimate relationship with Raoul Hausmann, a member of the Berlin Dada movement. Höch's involvement with the Berlin Dadaists began in earnest in 1917.

After her schooling, she worked in the handicrafts department for the publisher Ullstein Verlag, designing dress and embroidery patterns for Die Dame (The Lady) and Die Praktische Berlinerin (The Practical Berlin Woman). The influence of this early work and training can be seen in her later work involving references to dress patterns and textiles. From 1926 to 1929 she lived and worked in the Netherlands. Höch made many influential friendships over the years, with Kurt Schwitters and Piet Mondrian among others. Höch, along with Hausmann, was one of the first pioneers of the art form that would come to be known as photomontage.

Art historian Maria Makela has characterized Höch's affair with Raoul Hausmann as "stormy", and identifies the central cause of their altercations—some of which ended in violence—in Hausmann's refusal to leave his wife. Hausmann continually disparaged Höch not only for her desire to marry him, which he described as a "bourgeois" inclination, but also for her opinions on art. Hausmann's hypocritical stance on women's emancipation spurred Höch to write "a caustic short story" entitled "The Painter" in 1920, the subject of which is "an artist who is thrown into an intense spiritual crisis when his wife asks him to do the dishes."