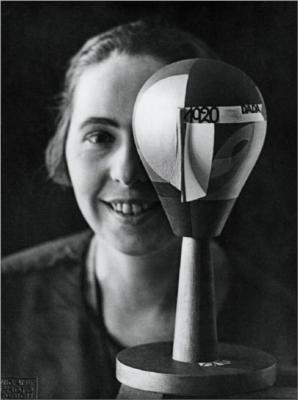 Sophie Henriette Gertrude Taeuber-Arp (/ˈtɔɪbər ˈɑːrp/; 19 January 1889 – 13 January 1943) was a Swiss artist, painter, sculptor, textile designer, furniture and interior designer, architect and dancer. She is considered one of the most important artists of concrete art and geometric abstraction of the 20th century.

Born in Davos, Switzerland, Sophie Henriette Gertrude Taeuber was the fifth child of Prussian pharmacist Emil Taeuber and Swiss Sophie Taeuber-Krüsi, from Gais in Appenzell Inner Rhodes, Switzerland. Her parents operated a pharmacy in Davos until her father died of tuberculosis when she was two years old, after which the family moved to Trogen, where her mother opened a pension. She studied textile design at the trade school (Gewerbeschule, today School of Applied Arts) in St. Gallen (1906–1910). She then moved on to the workshop of Wilhelm von Debschitz at his school in Munich, where she studied in 1911 and again in 1913; in between, she studied for a year at the School of Arts and Crafts (Kunstgewerbeschule) in Hamburg. She joined the Schweizerischer Werkbund in 1915. In the same year, she attended the Laban School of Dance in Zurich, and in the summer she joined the artist colony of Monte Verita in Ascona; in 1917, she danced with Suzanne Perrottet, Mary Wigman and others at the Sun Festival organised by Laban in Ascona.

In 1915, at an exhibition at the Tanner Gallery, she met the Dada artist Jean "Hans" Arp, who had moved to Zurich in 1915 to avoid being drafted by the German Army during the First World War. They were to collaborate on numerous joint projects until her death in 1943. They married in 1922 and she changed her last name to Taeuber-Arp.

Taeuber-Arp taught weaving and other textile arts at the Kunstgewerbeschule Zürich (now Zurich University of the Arts) from 1916 to 1929. Her textile and graphic works from around 1916 through the 1920s are among the earliest Constructivist works, along with those of Piet Mondrian and Kasimir Malevich. These sophisticated geometric abstractions reflect a subtle understanding of the interplay between colour and form.

During this period, she was involved in the Zürich Dada movement, which centred on the Cabaret Voltaire. She took part in Dada-inspired performances as a dancer, choreographer, and puppeteer, and she designed puppets, costumes and sets for performances at the Cabaret Voltaire as well as for other Swiss and French theatres. At the opening of the Galerie Dada in 1917, she danced to poetry by Hugo Ball while wearing a shamanic mask by Marcel Janco. A year later, she was a co-signer of the Zurich Dada Manifesto.

She also made a number of sculptural works, such as a set of abstract "Dada Heads" of turned polychromed wood. With their witty resemblance to the ubiquitous small stands used by hatmakers, they typified her elegant synthesis of the fine and applied arts.

Tauber-Arp was also close friends and contemporaries with the French-Romanian avant-garde poet, essayist, and artist, Tristan Tzara, one of the central figures of the Dada movement. In 1920, Tzara solicited over four dozen Dadaist artists, among which were Tauber-Arp, Jean Arp, Jean Cocteau, Marcel Duchamp, and Hannah Hoch. Tzara planned to use the contributed text and images to create an anthology of Dada work entitled Dadaglobe. A worldwide release of 10,000 copies was planned, but the project was abandoned when its main backer, Francis Picabia, distanced himself from Tzara in 1921.