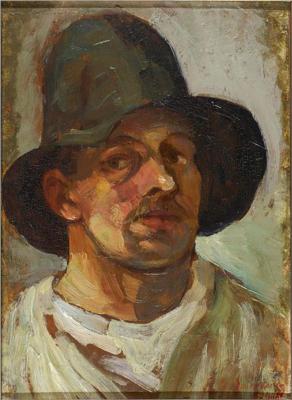 Theo van Doesburg (Dutch: [ˈteːjoː vɑn ˈduzbɵrx], 30 August 1883 – 7 March 1931) was a Dutch artist, who practiced painting, writing, poetry and architecture. He is best known as the founder and leader of De Stijl.

Theo van Doesburg was born Christian Emil Marie Küpper on 30 August 1883, in Utrecht, the Netherlands, as the son of the photographer Wilhelm Küpper (nl) and Henrietta Catherina Margadant. After a short training in acting and singing he decided to become a painter. He always regarded his stepfather, Theodorus Doesburg, to be his natural father, so that his first works are signed with Theo Doesburg, to which he later added the insertion "van".

His first exhibition was in 1908. From 1912 onwards, he supported his works by writing for magazines. He considered himself to be a modern painter, at that time, although his early work is in line with the Amsterdam Impressionists and is influenced by Vincent van Gogh, both in style and subject matter. This suddenly changed in 1913 after reading Wassily Kandinsky's Rückblicke, in which he looks back at his life as a painter from 1903–1913. It made him realize there was a higher, more spiritual level in painting that originates from the mind rather than from everyday life, and that abstraction is the only logical outcome of this. It was already in 1912 that Van Doesburg was criticizing Futurism in an art article in Eenheid no. 127, on 9 November 1912, because "The mimetic expression of velocity (whatever its form may be: the aeroplane, the automobile, and so on) is diametrically opposed to the character of painting, the supreme origin of which is to be found in inner life". On 6 November 1915, he wrote in the same journal: "Mondrian realizes the importance of line. The line has almost become a work of art in itself; one can not play with it when the representation of objects perceived was all-important. The white canvas is almost solemn. Each superfluous line, each wrongly placed line, any color placed without veneration or care, can spoil everything—that is, the spiritual".

It was while reviewing an exposition for one of these magazines he wrote for, in 1915 (halfway through his two-year service in the army), that he came in contact with the works of Piet Mondrian, who was eight years older than he was, and had by then already gained some attention with his paintings. Van Doesburg saw in these paintings his ideal in painting: a complete abstraction of reality. Soon after the exposition Van Doesburg got in contact with Mondrian, and together with related artists Bart van der Leck, Antony Kok (nl), Vilmos Huszár and Jacobus Oud they founded the magazine De Stijl in 1917.

Although De Stijl was made up of many members, Van Doesburg was the "ambassador" of the movement, promoting it across Europe. He moved to Weimar in 1922, deciding to make an impression on the Bauhaus principal, Walter Gropius, in order to spread the influence of the movement.

While Gropius accepted many of the precepts of contemporary art movements he did not feel that Doesburg should become a Bauhaus master. Doesburg then installed himself near to the Bauhaus buildings and started to attract school students interested in the new ideas of Constructivism. Dadaism, and De Stijl.