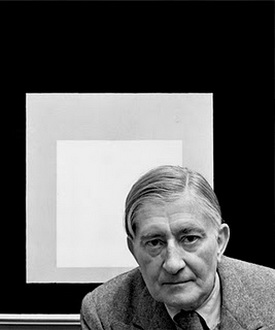 Josef Albers was a painter, poet, sculptor, and theoretician, best known for his iconic series of abstract paintings, the Homage to the Square series. He also was an educator whose work, both in Europe and in the United States, formed the basis of some of the most influential and far-reaching art education programs of the 20th century.

Born on March 19, 1888, in Bottrop, Germany, Albers enrolled as a student at the newly opened Bauhaus school in Weimar in 1920. The Bauhaus, which advocated for the synthesis of fine art and craftsmanship, soon became one of the most influential design schools in Germany. In 1922 Albers became a faculty member at the Bauhaus and was promoted to professor in 1925. Around this time, he also married Anni Fleischmann, who was a student at the school. During this period, Albers explored many different media like furniture design, glasswork, metalwork, typography, and photography. Some of his notable works from the time include sandblasted flashed glass artworks like Impossibles (1931) and Rolled Wrongly (1931). After the Nazi government closed the Bauhaus in 1933, Albers and his wife immigrated to the United States.

On the recommendation of architect Philip Johnson, both Albers and Anni were offered positions at the experimental Black Mountain College in North Carolina. He served as the head of the painting department between 1939-1949, and he taught the likes of Cy Twombly and Robert Rauschenberg. While he was teaching, Albers continued to develop his artistic practice. In 1947 he began working on the series Adobe/Variants, which was inspired by Mexican architecture. The series combined two characteristics of Albers’s art: his exploration of color theory and his background in design and architecture. Paintings from the series like Variant/Adobe: Familiar Front (1948) and Red Wall (1947-1956) explored how different colors interact when placed next to one another.

In 1950, Albers left Black Mountain College to head the design program at Yale University in New Haven, Connecticut. From this point, Albers mainly focused on two key series: Homage to the Square and Structural Constellation. In the series Structural Constellation, Albers created various compositions of rotationally straight lines, that can be described as two-dimensional renderings of three-dimensional objects. Structural Constellation deals with perceptual ambiguity: the artist’s carefully planned configurations like Structural Constellation: Alpha (1954) depict a floating geometric form that can simultaneously be viewed in multiple ways. From 1949 Albers began working on his signature series of prints and paintings, Homage to the Square. Paintings from the series like Homage to the Square: Apparition (1959) and Study for Homage to the Square: Departing in Yellow (1964) are based on a compositional scheme of squares in different colors and arrangements. Through the various examples in the series, Albers examined his color theory and how colors interact when placed next to one another. Correspondingly, he documented these effects in his writings, and in 1963, he published the book Interaction of Color (1963), which provided a complex explanation of principles of color theory. The book is considered a masterwork in art education, and it remains an essential source of color theory.

In the later stages of his career, Albers also created murals. In 1959, his mural Two Structural Constellations (1959) was engraved in the lobby of the Corning Glass Building in Manhattan. His monumental mural, Manhattan (1963), that was an homage to New York, was installed in the Pan Am Building in New York City. Albers died at the age of 88, on March 25, 1976, in New Haven, Connecticut.

Josef Albers (/ˈælbərz, ˈɑːl-/; German: [ˈalbɐs]; March 19, 1888 – March 25, 1976) was a German-born American artist and educator whose work, both in Europe and in the United States, formed the basis of modern art education programs of the twentieth century.

Albers was born into a Roman Catholic family of craftsmen in Bottrop, Westphalia, Germany. He worked from 1908 to 1913 as a schoolteacher in his home town; he also trained as an art teacher at Königliche Kunstschule in Berlin, Germany, from 1913 to 1915. From 1916 to 1919 he began his work as a printmaker at the Kunstgewerbschule in Essen. In 1918 he received his first public commission, Rosa mystica ora pro nobis, a stained-glass window for a church in Essen. In 1919 he went to Munich, Germany, to study at the Königliche Bayerische Akademie der Bildenden Kunst, where he was a pupil of Max Doerner and Franz Stuck.

Albers enrolled as a student in the preliminary course (Vorkurs) of Johannes Itten at the Weimar Bauhaus in 1920. Although Albers had studied painting, it was as a maker of stained glass that he joined the faculty of the Bauhaus in 1922, approaching his chosen medium as a component of architecture and as a stand-alone art form. The director and founder of the Bauhaus, Walter Gropius, asked him in 1923 to teach in the preliminary course ‘Werklehre' of the department of design to introduce newcomers to the principles of handicrafts, because Albers came from that background and had appropriate practice and knowledge.

In 1925, Albers was promoted to professor, the year the Bauhaus moved to Dessau. At this time, he married Anni Albers (née Fleischmann) who was a student there. His work in Dessau included designing furniture and working with glass. As a younger art teacher, he was teaching at the Bauhaus among artists who included Oskar Schlemmer, Wassily Kandinsky, and Paul Klee. The so-called form master, Klee taught the formal aspects in the glass workshops where Albers was the crafts master; they cooperated for several years.

With the closure of the Bauhaus under Nazi pressure in 1933 the artists dispersed, most leaving the country. Albers emigrated to the United States. The architect Philip Johnson, then a curator at the Museum of Modern Art, arranged for Albers to be offered a job as head of a new art school, Black Mountain College, in North Carolina. In November 1933, he joined the faculty of the college where he was the head of the painting program until 1949.

At Black Mountain, his students included Ruth Asawa, Ray Johnson, Robert Rauschenberg, Cy Twombly, and Susan Weil. He also invited important American artists such as Willem de Kooning, to teach in the summer seminar. Weil remarked that, as a teacher, Albers was "his own academy" and she said that Albers claimed that "when you’re in school, you’re not an artist, you’re a student", although he was very supportive of self-expression when one became an artist and began her or his journey. Albers produced many woodcuts and leaf studies at this time.