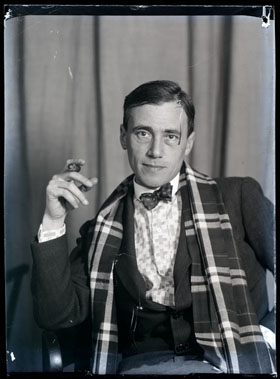 Hans Richter (6 April 1888 – 1 February 1976) was a German painter, graphic artist, avant-gardist, film-experimenter and producer. He was born in Berlin into a well-to-do family and died in Minusio, near Locarno, Switzerland.

Richter's first contacts with modern art were in 1912 through the "Blaue Reiter" and in 1913 through the "Erster Deutscher Herbstsalon (de)" gallery "Der Sturm", in Berlin. In 1914 he was influenced by cubism. He contributed to the periodical Die Aktion in Berlin. His first exhibition was in Munich in 1916, and Die Aktion published as a special edition about him. In the same year he was wounded and discharged from the army and went to Zürich and joined the Dada movement.

Richter believed that the artist's duty was to be actively political, opposing war and supporting the revolution. His first abstract works were made in 1917. In 1918, he befriended Viking Eggeling, and the two experimented together with film. Richter was co-founder, in 1919, of the Association of Revolutionary Artists ("Artistes Radicaux") at Zürich. In the same year he created his first Prélude (an orchestration of a theme developed in eleven drawings). In 1920 he was a member of the November group in Berlin and contributed to the Dutch periodical De Stijl.

Throughout his career, he claimed that his 1921 film, Rhythmus 21, was the first abstract film ever created. This claim is not true: he was preceded by the Italian Futurists Bruno Corra and Arnaldo Ginna between 1911 and 1912 (as they report in the Futurist Manifesto of Cinema), as well as by fellow German artist Walter Ruttmann who produced Lichtspiel Opus 1 in 1920. Nevertheless, Richter's film Rhythmus 21 is considered an important early abstract film.

About Richter's woodcuts and drawings Michel Seuphor wrote: "Richter's black-and-whites together with those of Arp and Janco, are the most typical works of the Zürich period of Dada." From 1923 to 1926, Richter edited, together with Werner Gräff and Mies van der Rohe, the periodical G. Material zur elementaren Gestaltung. Richter wrote of his own attitude toward film:

Richter moved from Switzerland to the United States in 1940 and became an American citizen. He taught in the Institute of Film Techniques at the City College of New York.

While living in New York City, Richter directed two feature films, Dreams That Money Can Buy (1947) and 8 x 8: A Chess Sonata in 8 Movements (1957) in collaboration with Max Ernst, Jean Cocteau, Paul Bowles, Fernand Léger, Alexander Calder, Marcel Duchamp, and others, which was partially filmed on the lawn of his summer house in Southbury, Connecticut.

After 1958, Richter spent parts of the year in Ascona and Connecticut and returned to painting.

In 1963, he directed the short film "From the Circus to the Moon" on the American artist Alexander Calder.

Richter was also the author of a first-hand account of the Dada movement titled Dada: Art and Anti-Art which also included his reflections on the emerging Neo-Dada artworks.