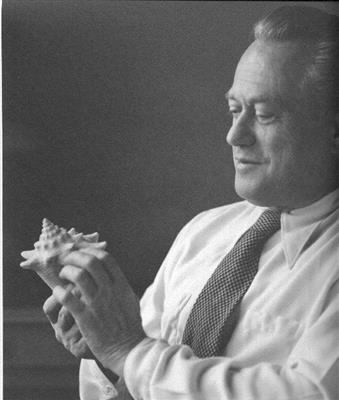 Lorser Feitelson (1898, Savannah, GA – 1978, Los Angeles, CA) was born in Savannah, Georgia, but was raised in New York City, where his family relocated shortly after his birth. Feiltelson rose to prominence on the West Coast as one of the founding fathers of Southern California-based Hard Edge painting.

Lorser Feitelson's works, alongside those of along with his peers Karl Benjamin, Frederick Hammersley and John McLaughlin, were featured in the landmark 1959 exhibition Four Abstract Classicists at the San Francisco Museum of Art and later traveled to Los Angeles County Museum of Art. Curated by Los Angeles-based critic and curator Jules Langsner, the exhibition introduced the general public to the dazzling visual language created by a revolutionary group of painters. A revised version of this exhibition re-titled West Coast Hard Edge was presented in London at the Institute of Contemporary Arts and then in Belfast, Northern Ireland at Queens Court. The painting "Magical Space Forms" from 1951, reproduced below, was included in this exhibition.

Feitelson, along with his wife Helen Lundeberg and the aforementioned artists, pioneered a movement that has been celebrated by the Orange County Museum’s nationally toured exhibition Birth of the Cool: California Art, Design and Culture at Midcentury. Additionally, contemporary art writer and scholar Dave Hickey, in his 2004 exhibition at the Otis College of Art and Design, christened Feitelson and the other Hard Edge painters as The Los Angeles School.

These artists made profound contributions to the development of American abstract painting. According to Hickey: “The New York School painters would create their idiom by internalizing abstraction, psychologizing it in the manner of Freud and Jung. The California painters take the opposite route by radically externalizing the surrealism of experience in the West. Their presumption, that surreality, visual anxiety and splendor have their roots in the physical and social world rather than the autonomous self, set art on the West Coast free from the rigor of concept and the regime of the personal that dominated American art in that moment. In the broader sense, this externalized vision granted artists the privilege of their sanity in a manic, narcissistic cultural moment and, in doing so, created the conditions out of which the language of art in Southern California art would evolve in the late twentieth century.”

Feitelson was raised in NYC and home-schooled in drawing by his art-loving father. As a child, he pored over the family’s collection of international magazines and frequently visited the Metropolitan Museum of Art.

Though his sketchbooks from those early years reveal a firm foundation in Old Master style draftsmanship, Feitelson rethought his approach to drawing after viewing the legendary International Exhibition of Modern Art in 1913 at the Armory.

The controversial work of Matisse, Duchamp and the Italian Futurists had a profound effect on the young artist. Feitelson began to produce a series of formally experimental figurative drawings and paintings. By 1916, the eighteen-year-old set up a studio in Greenwich Village and set out to establish himself as a painter.

Like all serious Modernist painters of the time, Feitelson wanted to continue his study/practice in Europe. He made his first journey to Paris in 1919 and enrolled as an independent student in life drawing at the Académie Colorossi. While in Paris, he also made numerous trips to Corsica, Italy, and sketches from his time there formed the basis for later works featuring peasants as subjects. After numerous trips to Europe, and before returning home to the States for good in 1927, Feitelson exhibited at Paris’ famous Salon d'Automne.