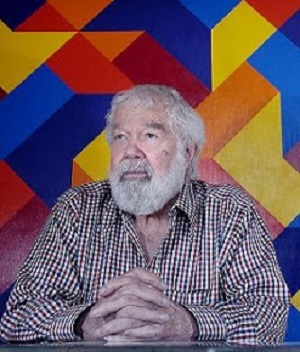 Karl Benjamin (December 29, 1925 – July 26, 2012) was an American painter of vibrant geometric abstractions, who rose to fame in 1959 as one of four Los Angeles-based Abstract Classicists and subsequently produced a critically acclaimed body of work that explores a vast array of color relationships. Working quietly at his home in Claremont, CA, he developed a rich vocabulary of colors and hard-edge shapes in masterful compositions of tightly balanced repose or high-spirited energy. At once intuitive and systematic, the artist is, in the words of critic Christopher Knight, "a colorist of great wit and inventiveness."

Benjamin was born in Chicago in 1925. He enrolled at Northwestern University in 1943, but dropped out to join the U.S. Navy during World War II. In 1946, after three years of military service, he moved to California to study English literature, history and philosophy at the University of Redlands with the help of the G.I. Bill. He received a B.A. degree and California teaching credentials in 1949.

With no formal education in art and no thought of becoming an artist, Benjamin married Beverly Jean Paschke, and began teaching in an elementary school in Bloomington, California in 1949. He started a family (daughters Beth Marie and Kris Ellen and son Bruce Lincoln), moved to Claremont in 1952, and subsequently taught in Chino for the next 30 years.

Benjamin's interest in art emerged serendipitously. Asked to develop art lessons for his students’ curriculum, he began working with crayons and became fascinated with the phenomenon of how colors can appear to change when juxtaposed with others. Eager to learn more, he took classes at the Claremont Graduate School (now Claremont Graduate University) and received an M.A. degree in 1960. By then, he was a serious painter and color was his subject matter.

In 1954, he had his first solo show, at the Pasadena Art Museum.

Benjamin had early success in Southern California, showing his work in museums and community galleries, but the event that put his work under a national spotlight and gave him a lasting label was "Four Abstract Classicists". Also featuring the work of Lorser Feitelson, John McLaughlin and Frederick Hammersley, the 1959-60 exhibition was viewed as Los Angeles’ answer to Abstract Expressionism. The West Coast artists’ crisp abstractions offered a bracingly cool alternative to New York’s emotion and action-packed style.

The exhibition was organized by critic Jules Langsner, and opened at the San Francisco Museum of Art, (now the San Francisco Museum of Modern Art) then travelled to the Los Angeles County Museum at Exposition Park (now the Los Angeles County Museum of Art). Renamed "West Coast Hard-Edge," the revised version later traveled to the Institute of Contemporary Art in London and Queen’s University in Belfast, Northern Ireland.

In the exhibition catalog, Langsner described Abstract Classicist painting as "Hard-edge painting" in which "color and shape are one and the same entity. Form gains its existence through color and color its being through form." Of Benjamin’s work, he wrote: "The elongated forms in the Karl Benjamin paintings interlock in a continuous composition that seems to be without beginning or end. Whenever one of these zigzag shapes appears to overlap an adjacent zigzag, it tucks itself back in somewhere else."