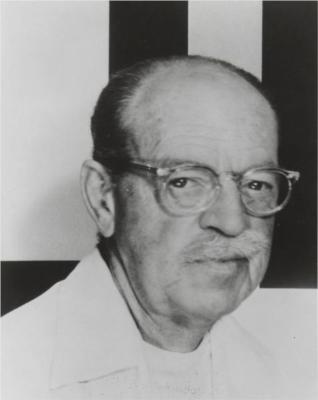 John Dwyer McLaughlin was an American abstract painter. Based primarily in California, he was a pioneer in minimalist and hard-edge painting.

John Dwyer McLaughlin (May 21, 1898 – March 22, 1976) was an American abstract painter. Based primarily in California, he was a pioneer in minimalism and hard-edge painting. Considered one of the most significant Californian postwar artists, McLaughlin painted a focused body of geometric works that are completely devoid of any connection to everyday experience and objects, inspired by the Japanese notion of the void. He aimed to create paintings devoid of any object hood including but not limited to a gestures, representations and figuration. This led him to the rectangle. Leveraging a technique of layering rectangular bars on adjacent planes, McLaughlin creates works that provoke introspection and, consequently, a greater understanding of one’s relationship to nature.

John McLaughlin was born in Sharon, Massachusetts. His father was a Massachusetts Superior Court judge and he had six siblings. His parents instilled in him an interest in art, most specifically Asian art.

McLaughlin served in both World Wars. His service in the United States Navy during World War I spanned from 1917 to 1921.

In 1928 he married Florence Emerson, a grandniece of Ralph Waldo Emerson. In 1935 they moved to Japan, where McLaughlin studied the art and language. When they returned to Boston in 1938, they opened The Tokaido, Inc., an art gallery which specialized in Japanese prints and other Asian items.

After studying Japanese at the University of Hawaii in Honolulu, he served the United States Marine Corps in World War II as a translator. Later in the war, he worked in U. S. Army Intelligence as a translator in Japan, India, China and Burma. In 1945 he was awarded the Bronze Star for meritorious service.

McLaughlin had begun painting during the 1930s, relatively late in life. He was self-taught, without receiving formal artistic training. His fondness for Asian art and his travels in that part of the world influenced his artistic style.

He settled in Dana Point, California in 1946 and began painting full-time.

A few of his earliest paintings were still lifes and landscapes, but the remainder of his pieces were abstracts. During this time period, he was one of just a few American artists creating abstracts. McLaughlin's work is characterized by a simplicity expressed as precise geometric forms, usually rectangles. His experiences in Asia were very important in developing his style. Zen masters taught that spaces between objects (the "marvelous void") could be more important than the objects themselves in facilitating meditation. The work of Kazimir Malevich and Piet Mondrian also strongly influenced McLaughlin. He wrote: "With respect to my direct influences I must stress my interest in 15th and 16th century Japanese painters. I have found comfort in some aspects of thought expressed by Malevitch, and I am indebted to Mondrian because his painting strongly indicated that the natural extension of Neo-Plasticism is the totally abstract."

From 1952 onward, he ceased using curves in his work. Paintings from his later period show increasing simplification of form and color palette.

He described his artistic philosophy: "My purpose is to achieve the totally abstract. I want to communicate only to the extent that the painting will serve to induce or intensify the viewer's natural desire for contemplation without benefit of a guiding principle. I must therefore free the viewer from the demands or special qualities imposed by the particular by omitting the image (object). This I manage by the use of neutral forms."