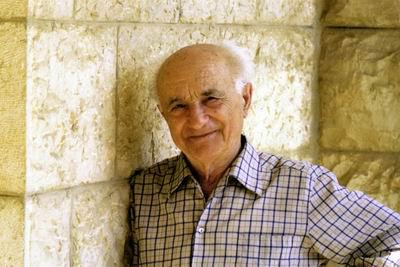 Ardon was born Max Bronstein in 1896 in Tuchów, Galicia (then Austria-Hungary, now Poland). In 1933 he emigrated to Jerusalem in Mandate Palestine. He was granted Palestinian citizenship in 1936 and changed his name to Mordecai Ardon.

He participated in the Venice Biennale of 1968.

Beginning in the 1950s Ardon adopted a complex system of symbolic images in his paintings, taken from the Jewish Mystical tradition (Kabbalah), from the Bible and from a tangible reality. In his painting "Gates of Light", for example, he expressed "the inner mystery and timelessness of the landscape." His work seeks to impart a cosmic dimension to the present, linking it to antiquity and mystery. The same approach can be found in "At the Gates of Jerusalem" (1967), which shows the attempt to "convey his feelings about the cosmic significance of Israel’s return to the Old City of Jerusalem during the Six-Day War". "Bird near a yellow wall" (1950) demonstrates his simplistic involvement with the Holocaust, a subject to which he was one of the few Israeli artists to devote a phase of his work, at that time.

As a teacher and director of the "New Bezalel", Ardon conveyed his sense of social involvement, his tendency towards Jewish mysticism and local mythology, and the combination of personal national symbols with reality-always stressing masterful technique. Pupils such as Avigdor Arikha, Yehuda Bacon, Naftali Bezem, Shraga Weil and Shmuel Boneh absorbed these influences and integrated them into their later work.

Ardon was seen as the father of the regional approach in Israeli art.

One of his most famous creations are the "Ardon Windows" (1980–1984), a set of large stained-glass windows displayed prominently in the National Library of Israel in Jerusalem, incorporating visual elements from the Kabbalah.