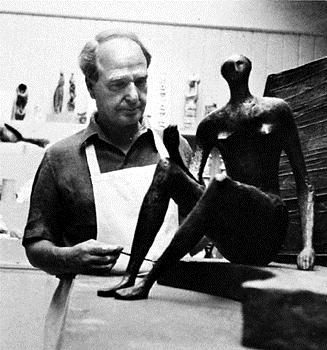 Henry Spencer Moore OM CH FBA (30 July 1898 – 31 August 1986) was an English artist. He is best known for his semi-abstract monumental bronze sculptures which are located around the world as public works of art. As well as sculpture, Moore produced many drawings, including a series depicting Londoners sheltering from the Blitz during the Second World War, along with other graphic works on paper.

His forms are usually abstractions of the human figure, typically depicting mother-and-child or reclining figures. Moore's works are usually suggestive of the female body, apart from a phase in the 1950s when he sculpted family groups. His forms are generally pierced or contain hollow spaces. Many interpreters liken the undulating form of his reclining figures to the landscape and hills of his birthplace, Yorkshire.

Moore was born in Castleford, the son of a coal miner. He became well-known through his carved marble and larger-scale abstract cast bronze sculptures, and was instrumental in introducing a particular form of modernism to the United Kingdom. His ability in later life to fulfil large-scale commissions made him exceptionally wealthy. Despite this, he lived frugally; most of the money he earned went towards endowing the Henry Moore Foundation, which continues to support education and promotion of the arts.

Henry Moore was born in Castleford, West Riding of Yorkshire, England, to Mary Baker and Raymond Spencer Moore. His father was of Irish origin and became pit deputy and then under-manager of the Wheldale colliery in Castleford. He was an autodidact with an interest in music and literature. Determined that his sons would not work in the mines, he saw formal education as the route to their advancement. Henry was the seventh of eight children in a family that often struggled with poverty. He attended infant and elementary schools in Castleford, where he began modelling in clay and carving in wood. He professed to have decided to become a sculptor when he was eleven after hearing of Michelangelo's achievements at a Sunday School reading.

On his second attempt he was accepted at Castleford Grammar School, which several of his siblings had attended, where his headmaster soon noticed his talent and interest in medieval sculpture. His art teacher broadened his knowledge of art, and with her encouragement, he determined to make art his career; first by sitting for examinations for a scholarship to the local art college. Moore's earliest recorded carvings – a plaque for the Scott Society at Castleford Secondary School, and a Roll of Honour commemorating the boys who went to fight in the First World War from the school – were executed around this time.

Despite his early promise, Moore's parents had been against him training as a sculptor, a vocation they considered manual labour with few career prospects. After a brief introduction as a student teacher, Moore became a teacher at the school he had attended. Upon turning eighteen, Moore volunteered for army service. He was the youngest man in the Prince of Wales' Own Civil Service Rifles regiment and was injured in 1917 in a gas attack, on 30 November at Bourlon Wood, during the Battle of Cambrai. After recovering in hospital, he saw out the remainder of the war as a physical training instructor, only returning to France as the Armistice was signed. He recalled later, "for me the war passed in a romantic haze of trying to be a hero." This attitude changed as he reflected on the destructiveness of war and in 1940 he wrote, in a letter to his friend Arthur Sale, that "a year or two after [the war] the sight of a khaki uniform began to mean everything in life that was wrong and wasteful and anti-life. And I still have that feeling."