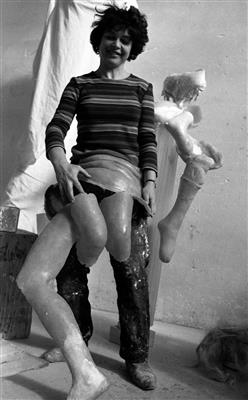 Alina Szapocznikow (Polish: [ʂapɔt͡ʂˈɲikɔf]; sometimes called Szaposznikow; (May 16, 1926 – March 2, 1973) was a Polish sculptor and Holocaust survivor. She produced casts of her and her son's body. She worked mainly in bronze and stone and her provocative work recalled genres such as surrealism, nouveau realism, and pop art.


During World War II she was imprisoned in the Pabianice and Łódź Ghettos and in Auschwitz, Bergen-Belsen and Theresienstadt Nazi concentration camps.


Szapocznikow was born in Kalisz in 1926 to a Jewish family (one mother, one father, and one younger brother). Her father, Jakub, was a dentist and her mother, Ryfka (Regina), was a pediatrician. Her family lived in Pabianice near Łódź. During these years, Szapocznikow attended a small Polish elementary school in Pabiance New Town and a State High School of St. Hedwig in Putawskiego St. Her father died from tuberculosis in 1938 right before the war broke out.


As a thirteen year old, Szapocznikow was soon left all alone with her mother, as her brother went missing shortly after the start of the war. Once they were relocated to the ghetto in Pabianice, they spent two years (February 1940 to May 1942) at the ghetto employed in the hospital - her mother as a doctor and Alina as a nurse. The familial pair continued to work as a doctor and nurse when they were moved to the Łódź ghettos at the end of May before being shipped even farther. They passed through Aushwitz on their way to the concentration camp in Bergen-Belsen.


Szpocznikow and her mother stayed at the camp for a total of 10 months, before being moved from the camp. According to documentation from their stay, the change in internment in autumn of 1943 was due to Szapocznikow's mother scolding of a German doctor who "did not acquit himself well of his duties." By autumn 1943, the familial pair was moved to Terezin where they stayed together for one more year before ultimately being separated. The artist's experiences during the end of the war are unknown. After the war, Szapocnikow headed to Prague with a group of prisoners while her mother returned to Łódź .

Alina Szapocznikow barely spoke of her war experiences during the entirety of her life. However, there are letter fragments of correspondences with her first husband, Ryszard Stanisławski that mention her war experience:

Alina Szapocznikow, once in Prague, decided to study the art of sculpture. She trained as a sculptor in Otokar Velimsky's studio in Prague from 1945–1946. In 1947 she studied at the Academy of Art and Industry in Prague under the tutelage of Josef Wagner, after which she attended Paul Niclausse's atelier at the École nationale supérieure des Beaux-Arts in Paris. During her time in Paris, she was introduced to the Polish community where she met her first husband, Ryszard Stanisławski, a Polish art historian, and the director of the Museum of Modern Art in Łódź. The artistic life of France was important in Szapocznikow's development as an artist - she was given the freedom to establish the fundamentals of sculpture. The artist was exposed to and inspired by the works of Jean Arp, Ossip Zadkine, Henry Moore and Alberto Giacometti.