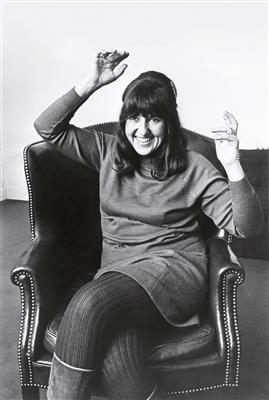 Rosalyn Drexler (born 25 November, 1926) is an American artist, novelist, Obie Award-winning playwright, and Emmy Award-winning screenwriter, and former professional wrestler. Although her early work was in sculpture, she was better known for her multimedia pop culture assemblages of found objects and her paintings, which included found images. Recently, her work has received renewed critical attention and a retrospective exhibition of her career opened at the Rose Art Museum in February 2016.

Drexler (née Bronznick) was born in 1926 in the Bronx, New York. She grew up in the Bronx and East Harlem, New York. Drexler had considerable exposure to the performing arts as a child, attending vaudeville acts with her friends and family. Her parents also exposed her to the visual arts at an early age, buying her art posters, books, coloring boxes, and crayons, which she has cited as an influence.

She attended the High School of Music and Art in New York City where she majored in voice. She attended Hunter College for one semester only before leaving school to marry figure painter Sherman Drexler at 19 in 1946. She is the subject of many of her husband's paintings. Together, they had a daughter and a son.

In 1951 the Drexlers lived near Botner's Gymnasium where a number of female professional wrestlers and carnies practiced. Drexler started working out and learning Judo there. She heard of a man, Billy Wolfe, who was organizing a women’s wrestling team. After having to call her husband for permission, she went down in Florida to train, wrestle, and tour under the character of "Rosa Carlo, the Mexican Spitfire." She did it out of a need to “get away from this family thing for a while…[it] was too much for [her]". While on tour, she wrestled in odd places such as a graveyard and an airplane-hangar. There is also a photo of her getting ready with an advertisement that she would be fighting Mae Young, a famous professional wrestler. She went on tour around the country, but returned home after becoming upset about racism in the southern states, such as segregated seating and water fountains. Andy Warhol made a series of silkscreen paintings based on a photograph of Drexler as Rosa Carlo.

Drexler's experience as Rosa Carlo later formed the basis of her 1972 critically acclaimed novel To Smithereens. She wrote the novel because she hated the experience, but thought it should not be wasted, and she should "at least get a book out of it." The novel was the basis of the 1980 film Below the Belt. The producers contacted Drexler about the title, to which she said that it was “not a wrestling title at all…[but] they said, ‘It sounds sexy.’”

When she was 54, she tried getting back into being an athlete and entered a power lifting contest, which she did not win.