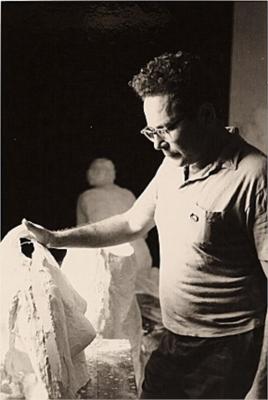 George Segal (November 26, 1924 – June 9, 2000) was an American painter and sculptor associated with the Pop Art movement. He was presented with the United States National Medal of Arts in 1999.

Although Segal started his art career as a painter, his best known works are cast life-size figures and the tableaux the figures inhabited. In place of traditional casting techniques, Segal pioneered the use of plaster bandages (plaster-impregnated gauze strips designed for making orthopedic casts) as a sculptural medium. In this process, he first wrapped a model with bandages in sections, then removed the hardened forms and put them back together with more plaster to form a hollow shell. These forms were not used as molds; the shell itself became the final sculpture, including the rough texture of the bandages. Initially, Segal kept the sculptures stark white, but a few years later he began painting them, usually in bright monochrome colors. Eventually he started having the final forms cast in bronze, sometimes patinated white to resemble the original plaster.

Segal's figures have minimal color and detail, which give them a ghostly, melancholic appearance. In larger works, one or more figures are placed in anonymous, typically urban environments such as a street corner, bus, or diner. In contrast to the figures, the environments were built using found objects.

Segal was born in New York; his Jewish parents were immigrants from Eastern Europe. His parents ran a butcher shop in the Bronx, then moved to a poultry farm in New Jersey where Segal grew up. He attended Stuyvesant High School, as well as the Pratt Institute, the Cooper Union, and New York University, from which he graduated in 1949 with a teaching degree. In 1946, he married Helen Segal and they bought another chicken farm in South Brunswick, New Jersey, where he lived for the rest of his life.

During the few years he ran the chicken farm, Segal held annual picnics at the site to which he invited his friends from the New York art world. His proximity to central New Jersey fostered friendships with professors from the Rutgers University art department. Segal introduced several Rutgers professors to John Cage, and took part in Cage's legendary experimental composition classes. Allan Kaprow coined the term happening to describe the art performances that took place on Segal's farm in the Spring of 1957. Events for Yam Festival also took place there. His widow, Helen Segal, keeps his memory and works alive through the George and Helen Segal Foundation.