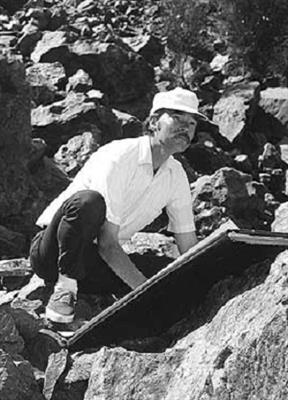 Roland Petersen (born 1926) is an American painter and printmaker of Danish birth. Petersen was born 1926 in Endelave, Denmark. His career spans over fifty years primarily in the San Francisco Bay Area and is perhaps best-known for his Picnic series (a yearly event at UC Davis) beginning in the 1960s to today. These paintings made their debut in New York at the Staempfli Gallery.

He received a B.A. and M.A. from the University of California at Berkeley 1949, San Francisco Art Institute, California College of Arts and Crafts (1952-1954), Atelier 17 (with Stanley Hayter), Islington Studio, London, the Print Workshop, London, and the Hans Hofmann School. He taught painting at Washington State University, printmaking at UC Berkeley, and painting and printmaking at UC Davis. He won a Guggenheim Fellowship and a Fulbright Fellowship.

After Graduation in 1950 Petersen made his way east to study with Hans Hoffman at the School of Fine Arts in Provincetown. Roland would return again the following summer of 1951 after a sojourn in Europe studying for six months with the printmaker Stanly William Hayter. Vestiges of Hofmann's approach, including his conviction that "every deep artistic expression is a product of a conscious feeling for reality," are present in Petersen's works of the early 1950s. It was Hoffman's teaching that showed Petersen how to incorporate "recognizable, everyday objects into this theory of opposition push/pull" a theory, which stresses the applying and combining of opposing forces in art.

Roland Petersen was a part of the Bay Area Figurative Movement - a mid-20th Century art movement made up of a group of artists in the San Francisco Bay Area who abandoned working in the prevailing style of Abstract Expressionism in favor of a return to figuration in painting during the 1950s and onward into the 1960s. The "Bridge Generation" (the 2nd of three generations) included the artists: Roland Petersen, Nathan Oliveira, Theophilus Brown, Paul John Wonner, John Hultberg, and Frank Lobdell. The 1st and 2nd/3rd generations included such artist as David Park, Richard Diebenkorn, Rex Ashlock, Elmer Bischoff, Wayne Thiebaud, James Weeks, Bruce McGaw, Henry Villierme, Joan Brown, Manuel Neri and Robert Qualters

In March 2010 Petersen's work was the subject of a major retrospective ("Roland Petersen: 50 Years of Painting") held at the Monterey Museum of Art in Monterey, California. Petersen, his daughter, and his wife, the photographer Caryl Ritter, were present. In 2016 a one man show In Perspective was held at his current gallery The Studio Shop Gallery in Burlingame Ca., and again on September 22 - October 15, 2017 - the show is called Six Decades of Painting - resulting in a bound book of Petersen's work under the same title.

Petersen has a very distinctive and recognizable style of printmaking. He works in color intaglio, which is a category of printmaking techniques including etching, drypoint and engraving. Intaglio means that the image is incised into the plate. Petersen uses this technique to achieve a variety of textures within each image, as well as multiple colors. The colors are bright and garish, and the effect of many of his prints is that of a photo negative, or an infrared photo. He makes use of patterns to throw the untextured areas into higher relief, for patterning reduces the intensity of color, much like newspaper photographs employ different densities of black dots to form a grayscale image. Petersen also uses complementary colors to set off forms. He tends to abstract the forms, and reduce them to geometric shapes, however they are usually still recognizable. There is a slight hint of influence from Oriental woodcuts.