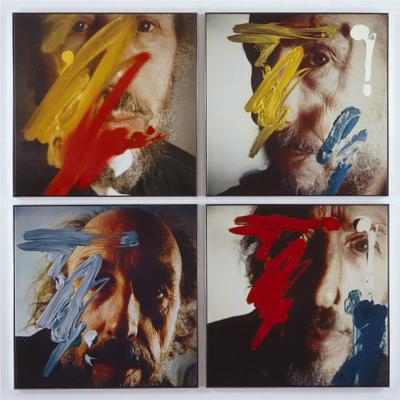 Richard William Hamilton CH (24 February 1922 – 13 September 2011) was an English painter and collage artist. His 1955 exhibition Man, Machine and Motion (Hatton Gallery, Newcastle upon Tyne) and his 1956 collage Just what is it that makes today's homes so different, so appealing?, produced for the This Is Tomorrow exhibition of the Independent Group in London, are considered by critics and historians to be among the earliest works of pop art. A major retrospective of his work was at Tate Modern until May 2014.

Hamilton was born in Pimlico, London on February 24, 1922. Despite having left school with no formal qualifications, he managed to gain employment as an apprentice working at an electrical components firm, where he discovered an ability for draughtsmanship and began to do painting at evening classes at Saint Martin's School of Art and at the Westminster School of Art. In 1938, he enrolled in the Royal Academy of Arts.

After spending the World War II working as a technical draftsman, he re-enrolled at the Royal Academy Schools but was expelled in 1946 on grounds of "not profiting from the instruction". Loss of his student status forced Hamilton to carry out National Service. After two years at the Slade School of Art, University College, London, Hamilton began exhibiting his work at the Institute of Contemporary Arts (ICA), where he also produced posters and leaflets. He taught at the Central School of Art and Design from 1952 until 1966.

Hamilton's early work was much influenced by D'Arcy Wentworth Thompson's 1917 text On Growth and Form. In 1952, at the first Independent Group meeting, held at the ICA, Hamilton was introduced to Eduardo Paolozzi's seminal presentation of collages produced in the late 1940s and early 1950s that are now considered to be the first standard bearers of Pop Art. Also in 1952, he was introduced to the Green Box notes of Marcel Duchamp through Roland Penrose, whom Hamilton had met at the ICA. At the ICA, Hamilton was responsible for the design and installation of a number of exhibitions including one on James Joyce and The Wonder and the Horror of the Human Head that was curated by Penrose. It was also through Penrose that Hamilton met Victor Pasmore who gave him a teaching post based in Newcastle Upon Tyne which lasted until 1966. Among the students Hamilton tutored at Newcastle in this period were Rita Donagh, Mark Lancaster, Tim Head, Roxy Music founder Bryan Ferry and Ferry's visual collaborator Nicholas de Ville. Hamilton's influence can be found in the visual styling and approach of Roxy Music. He described Ferry as "his greatest creation". Ferry repaid the compliment, naming him in 2010 as the living person he most admired, saying "he greatly influenced my ways of seeing art and the world".

Hamilton gave a 1959 lecture, "Glorious Technicolor, Breathtaking Cinemascope and Stereophonic Sound", a phrase taken from a Cole Porter lyric in the 1957 musical Silk Stockings. In that lecture, which sported a pop soundtrack and the demonstration of an early Polaroid camera, Hamilton deconstructed the technology of cinema to explain how it helped to create Hollywood’s allure. He further developed that theme in the early 1960s with a series of paintings inspired by film stills and publicity shots.