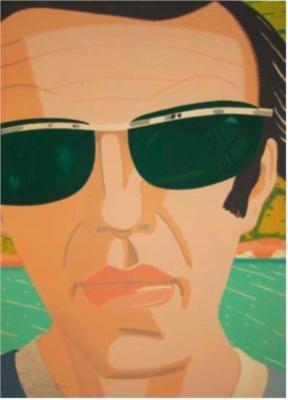 Alex Katz (born July 24, 1927) is an American figurative artist known for his paintings, sculptures, and prints. He is represented by numerous galleries internationally.

Alex Katz was born to a Jewish family in Brooklyn, New York, as the son of an émigré who had lost a factory he owned in Russia to the Soviet revolution. In 1928 the family moved to St. Albans, Queens, where Katz grew up.

From 1946 to 1949 Katz studied at The Cooper Union in New York, and from 1949 to 1950 he studied at the Skowhegan School of Painting and Sculpture in Skowhegan, Maine. Skowhegan exposed him to painting from life, which would prove pivotal in his development as a painter and remains a staple of his practices today. Katz explains that Skowhegan's plein air painting gave him "a reason to devote my life to painting." Every year from early June to mid-September, Katz moves from his SoHo loft to a 19th-century clapboard farmhouse in Lincolnville, Maine. A summer resident of Lincolnville since 1954, he has developed a close relationship with local Colby College. From 1954 to 1960, he made a number of small collages of still lifes, Maine landscapes, and small figures. He met Ada Del Moro, who had studied biology at New York University, at a gallery opening in 1957. In 1960, Katz had his first (and only) son, Vincent Katz. Vincent Katz had two sons, Isaac and Oliver, who have been the subjects of Katz's paintings.

Katz has admitted to destroying a thousand paintings during his first ten years as a painter in order to find his style. Since the 1950s, he worked to create art more freely in the sense that he tried to paint "faster than [he] can think." His works seem simple, but according to Katz they are more reductive, which is fitting to his personality. "(The) one thing I don't want to do is things already done. As for particular subject matter, I don't like narratives, basically."

Katz achieved great public prominence in the 1980s. He is well known for his large paintings, whose bold simplicity and heightened colours are now seen as precursors to Pop Art.

Katz's paintings are divided almost equally into the genres of portraiture and landscape. Since the 1960s he has painted views of New York (especially his immediate surroundings in Soho), the landscapes of Maine, where he spends several months every year, as well as portraits of family members, artists, writers and New York society protagonists. His paintings are defined by their flatness of colour and form, their economy of line, and their cool but seductive emotional detachment. A key source of inspiration is the woodcuts produced by Japanese artist Kitagawa Utamaro.

In the early 1960s, influenced by films, television, and billboard advertising, Katz began painting large-scale paintings, often with dramatically cropped faces. Ada Katz, whom he married in 1958, has been the subject of over 250 portraits throughout his career. To make one of his large works, Katz paints a small oil sketch of a subject on a masonite board; the sitting might take an hour and a half. He then makes a small, detailed drawing in pencil or charcoal, with the subject returning, perhaps, for the artist to make corrections. Katz next blows up the drawing into a "cartoon," sometimes using an overhead projector, and transfers it to an enormous canvas via "pouncing"—a technique used by Renaissance artists, involving powdered pigment pushed through tiny perforations pricked into the cartoon to recreate the composition on the surface to be painted. Katz pre-mixes all his colors and gets his brushes ready. Then he dives in and paints the canvas—12 feet wide by 7 feet high or even larger—in a session of six or seven hours.