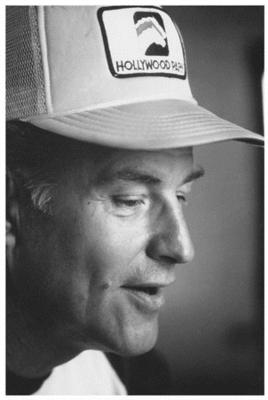 Robert Irwin (born September 12, 1928) is an American installation artist who has explored perception and the conditional in art, often through site-specific, architectural interventions that alter the physical, sensory and temporal experience of space. He began his career as a painter in the 1950s, but in the 1960s shifted to installation work, becoming a pioneer whose work helped to define the aesthetics and conceptual issues of the West Coast Light and Space movement. His early works often employed light and veils of scrim to transform gallery and museum spaces, but since 1975, he has also incorporated landscape projects into his practice. Irwin has conceived over fifty-five site-specific projects, at institutions including the Getty Center (1992–98), Dia:Beacon (1999–2003), and the Chinati Foundation in Marfa, Texas (2001–16). The Museum of Contemporary Art, Los Angeles mounted the first retrospective of his work in 1993; in 2008, the Museum of Contemporary Art San Diego presented another, spanning fifty years in his career. Irwin received a Guggenheim Fellowship in 1976, a MacArthur Fellowship in 1984, and was elected as a member of the American Academy of Arts and Letters in 2007. He lives and works in San Diego, California.

In 1977, Robert Irwin wrote the following about himself: “I began as a painter in the middle of nowhere with few questions… My first real question concerned the arbitrariness of my paintings… I used my paintings as a step-by-step process, each new series of works acting in direct response to those questions raised by the previous series. I first questioned the mark as meaning and then even as focus; I then questioned the frame as containment, the edge as the beginning and end of what I see… consider the possibility that nothing ever really transcends its immediate environment… I tried to respond directly to the quality of each situation I was in, not to change it wholesale into a new or ideal environment, but to attend directly to the nature of how it already was. How is it that a space could ever come to be considered empty when it is filled with real and tactile events?” (Robert Irwin, 1977) Robert Irwin’s notion of art derived from a series of experiential perceptions. As an abstract, open-minded thinker, he presented experience first as perception or sense. He concluded that a sense of knowing, or ability to identify, helped to clarify perception. For example,

“We know the sky’s blueness even before we know it as “blue”, let alone as “sky.”

He explained later that the conception of an abstract thought occurs in the mind, through the concept of self. Following, the physical form is then recognized, communicating the form to the community. Then, the Objective compound occurs, delineating behavioral norms and artistic norms, becoming identifiable. Then the boundaries and axioms introduce logic and reasoning and decisions can be made: either inductive or deductive. Formalism follows, proving and convincing a decision about the object being perceived. The study done by Irwin suggested that: “…all ideas and values have their roots in experience,… they can be held separate at any point and developed directly on the grounds of function and use, both that they in fact remain relative to the condition of both our subjective and objective being.” Robert Irwin’s philosophy defined his idea of art as a series of aesthetic inquiries, an opportunity for cultural innovation, a communicative interaction with society, and as compounded historical development.