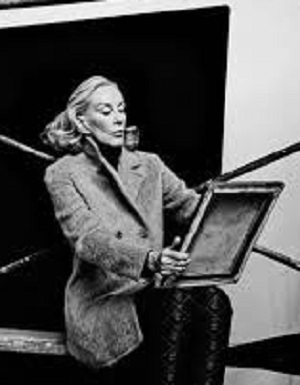 Helen Pashgian (born 1934) is an American visual artist who lives and works in Pasadena, California. She is a primary member of the Light and Space art movement of the 1960s, but her role has been historically under-recognized.

She received her B.A. from Pomona College in 1956, attended Columbia University from 1956-57, and received her M.A. from Boston University in 1958. While pursuing a Ph.D. at Harvard University in preparation for a career in academia or museum work, Pashgian taught an applied art class at a local high school and eventually transitioned into art-making.

Pashgian creates sculptures made of industrial materials such as resin, fiberglass, plastic, and coated glass. The luminous properties of these materials reflect her longstanding interest in the effects and perception of light. The artist has focused primarily on cast resin, "creating intimately scaled, translucent objects that incorporate vibrant colors and precisely finished surfaces. The perception of these works shifts as the viewer moves around them, and they seem at times to be solid forms and at others to be dissolving into space."

In the 1960s and 1970s, Pashgian, along with the artist Mary Corse, was one of only two female members of the California-based Light and Space movement. Other members include James Turrell and Robert Irwin (artist).

In March 2014 the first large-scale sculptural installation of Pashgian's work opened at the Los Angeles County Museum of Art (LACMA).

The artist is represented by TOTAH in New York City.

Although Pashgian has shown her work, steadily, in solo and group shows since the 1960s, she did not achieve the same widespread recognition as her male contemporaries. In 2013 she was a recipient of the Distinguished Women in the Arts award from the Museum of Contemporary Art Los Angeles (MOCA). She was an artist-in-residence at the California Institute of Technology from 1970-71, and received an individual artists grant from the National Endowment of the Arts in 1986.