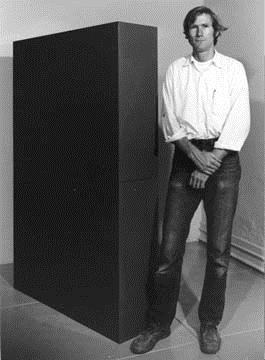 After graduating from high school, McCracken served in the United States Navy for four years before enrolling in the California College of Arts and Crafts in Oakland, earning a B.F.A. in 1962 and completing most of the work for an M.F.A. During these years he studied with Gordon Onslow Ford and Tony DeLap.

Internationally recognized John McCracken commenced developing his earliest sculptural work while in grad school at California College of Arts and Crafts along with Minimalists John Slorp and Peter Schnore, and painters Tom Nuzum, Vincent Perez, and Terry StJohn, 1964, 1965. Equally well known Dennis Oppenheim, enrolled in the M.F.A. program at nearby Stanford, was a frequent visitor to this more vibrant graduate program. While experimenting with increasingly three-dimensional canvases, McCracken began to produce art objects made with industrial techniques and materials, plywood, sprayed lacquer, pigmented resin, creating the ever more minimalistic works featuring highly-reflective, smooth surfaces. He applied techniques akin to those used in surfboard construction—popular in Southern California. Later McCracken was part of the Light and Space movement that includes James Turrell, Peter Alexander, Larry Bell, Robert Irwin and others. In interviews, however, he usually cited his greatest influences as the hard edge works of the Abstract Expressionist Barnett Newman and Minimalists like Donald Judd, Dan Flavin and Carl Andre.

Early objects created by John McCracken were derived from company logos such as the Chevron corporation logo. His sculptures deal with the interrelationships existing between the material world and design.

In 1966, McCracken generated his signature sculptural form: the plank, a narrow, monochromatic, rectangular board format that leans at an angle against the wall (the site of painting) while simultaneously entering into the three-dimensional realm and physical space of the viewer. He conceived the plank idea in a period when artists across the stylistic spectrum were combining aspects of painting and sculpture in their work and many were experimenting with sleek, impersonal surfaces. As the artist noted, "I see the plank as existing between two worlds, the floor representing the physical world of standing objects, trees, cars, buildings, [and] human bodies, ... and the wall representing the world of the imagination, illusionist painting space, [and] human mental space." The sculptures consist of plywood forms coated with fiberglass and layers of polyester resin. While the polished resin surface recalls the aesthetic of 1960s southern California surfboard and Kustom Kar cultures, the title was drawn from advertising slogans in fashion magazines. In addition to the planks, the artist also creates wall pieces and free-standing sculptures in varying geometrical shapes and sizes, ranging from smaller forms on pedestals to large-scale, outdoor structures in the shape of pyramids, ziggurats, tetrahedrons and occasionally crystals. He worked in highly polished stainless steel and bronze and occasionally made work that in effect sliced the planks into thin, repeating elements that leaned against the wall in rows.