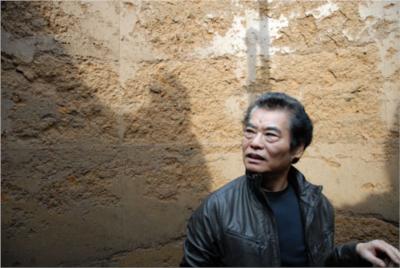 He is one of the key members of Mono-ha, a group of artists who became prominent in the late 1960s and 1970s. The Mono-ha artists explored the encounter between natural and industrial materials, such as stone, steel plates, glass, light bulbs, cotton, sponge, paper, wood, wire, rope, leather, oil, and water, arranging them in mostly unaltered, ephemeral states. The works focus as much on the interdependency of these various elements and the surrounding space as on the materials themselves.

Nobuo Sekine was born in 1942 in Shiki City, Saitama Prefecture, Japan. From 1962 to 1968, he was a student in the painting department at Tama Art University in Tokyo, where he studied under influential artist-teachers Yoshishige Saito and Jiro Takamatsu. Takamatsu’s illusionistic paintings and sculpture were central to the development of the Tokyo art scene at that time.

Sekine’s early work reflected this approach. He was included in the seminal Tricks and Vision: Stolen Eyes group exhibition held at Tokyo Gallery and Muramatsu Gallery in 1968. There, he exhibited Phase No.4 (1968) (位相 No.4), a wall-mounted sculpture. Depending on the angle from which one viewed this work, its cylindrical shape appeared whole or fragmented. Sekine held his first solo exhibition at Tokyo Gallery the following year.

The major turning point in Sekine’s career came in October 1968, when he created the work Phase: Mother Earth in Kobe’s Suma Rikyu Park for the First Open Air Contemporary Sculpture Exhibition (第一回野外彫刻展). Made with the assistance of Susumu Koshimizu and Katsuro Yoshida, the work consisted of a hole dug into the ground, 2.7 meters deep and 2.2 meters in diameter, with the excavated earth compacted into a cylinder of exactly the same dimensions.

He conceived the work as a “thought experiment” that would deal with the laws of awareness of phases of space—a form of “reasoned thought that deduces whether or not one’s hypotheses are true, and in some cases, can ignore the physical phenomena of reality.” He further elaborates as follows: "If you dig a hole in the earth and keep digging forever, eventually the earth will be like an eggshell, and if you go on to pull out all the earth, it will be reversed into a negative version of itself. "
Phase—Mother Earth was an early manifestation of Sekine’s engagement with the concept of “phase” (位相) in topology (位相幾何学), a branch of mathematics concerned with abstract space and connectedness—specifically the properties that are preserved under continuous deformations. Through this discipline, Sekine perceives form, matter, and space as infinitely malleable.
Phase-Mother Earth is considered to be the initial work of the Mono-ha movement. The work was re-created in 2008 and 2012.

Phase—Sponge (1968) (位相：スポンジ) was a white cylinder of sponge, distorted under the weight of a black sheet of iron laid on top of it. One can understand from this work that structure remains the same even if there are changes in form, and that what is deformed can be restored to its original shape.Writing about this work, Lee Ufan suggested that “perhaps all primitive people had to do was to stack up rocks like dolmens. However, in today’s industrial society, an iron plate on a sponge cylinder more naturally elicits a response”