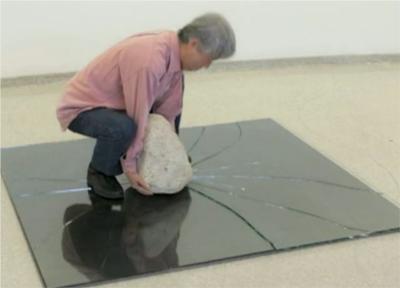 Ufan setting up one of his sculptures at the Guggenheim

Lee Ufan (Korean: 이우환, Hanja: 李禹煥, Korean pronunciation: [iːuhwan] born 1936 in Haman County, in South Kyongsang province in Korea) is a Korean minimalist painter and sculptor artist and academic, honored by the government of Japan for having "contributed to the development of contemporary art in Japan." The art of this artist, who has long been based in Japan, is rooted in an Eastern appreciation of the nature of materials and also in modern European phenomenology. The origin of Mono-ha may be found in Lee‘s article "Sonzai to mu wo koete Sekine Nobuo ron (Beyond Being and Nothingness – A Thesis on Sekine Nobuo." Once this initial impetus given, Mono-ha congealed with the participation of the students of the sculptor Saito Yoshishige, who was teaching at Tama University of Art at the time. One evidence may be found in the book [ba, so, toki] (場 相 時, place phase time) (Spring, 1970). Lee, the main theorist of the Mono-ha (“School of Things”) tendency in Japan in the late 1960s and early 1970s, was trained as a philosopher. As a painter, Lee contributed to 'Korean Monotone Art' (Dansaekjo Yesool, 單色調 藝術), the first artistic movement in 20th century Korea to be promoted in Japan. He advocates a methodology of de-westernization and demodernization in both theory and practice as an antidote to the Eurocentric thought of 1960s postwar Japanese society. Lee divides his time between Kamakura, Japan and Paris, France.

Born in Haman-gun, Gyeongsangnam-do in 1936, Lee Ufan was raised by his parents and Confucian grandfather. Lee studied painting at the College of Fine Arts at Seoul National University for just two months and moved to Yokohama, Japan in 1956, where he earned a degree in philosophy in 1961. Whilst studying philosophy Ufan painted in a restrained, traditional Japanese style, eschewing the expressive abstraction of the contemporary Japanese Gutai movement. After graduating from the university in Japan, 1961, he threw himself against the South–North unification movement and the military regime. In 1964, Lee was arrested and tortured by the Korean Central Intelligence Agency (KCIA).

Lee spent his early working years pursuing careers as an art critic, philosopher, and artist. In Japan he became an active participant in the countercultural upheavals surrounding the Anpo Movement of the 1960s. He came to prominence in the late 1960s as one of the founders and theoretical leaders of the avant garde Mono-ha (School of Thing) group. Mono-Ha was related in Arte Povera movement of the 1960s and Japan's first contemporary art movement to gain international recognition. The Mono-Ha school of thought rejected Western notions of representation, choosing to focus on the relationships of materials and perceptions rather than on expression or intervention. The movement's goal was to embrace the world at large and encourage the fluid coexistence of numerous beings, concepts, and experiences. Lee U-fan's position in the philosophy department at Nihon University in Tokyo earned him a distinguished role as the movement's spokesman. In 1973, he was appointed Professor of Tama Art University in Tokyo and he stayed there until 2007. Yoshio Itagaki was one of his students in 1989–1991. He is Professor emeritus at Tama Art University.