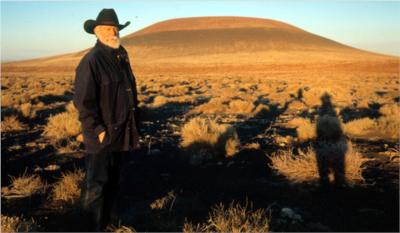 James Turrell (born May 6, 1943) is an American artist primarily concerned with light and space. Turrell was a MacArthur Fellow in 1984. Turrell is best known for his work in progress, Roden Crater, a natural cinder cone crater located outside Flagstaff, Arizona that he is turning into a massive naked-eye observatory.

James Turrell was born in Los Angeles, California. His father, Archibald Milton Turrell, was an aeronautical engineer and educator. His mother, Margaret Hodges Turrell, trained as a medical doctor and later worked in the Peace Corps. His parents were Quakers.

Turrell obtained a pilot's license when he was 16 years old. Later, registered as a conscientious objector during the Vietnam War, he ended up flying Buddhist monks out of Chinese-controlled Tibet. Some writers have suggested it was a CIA mission; Turrell called it "a humanitarian mission" — and that he found "some beautiful places to fly". For years he restored antique airplanes to support his "art habit".

He received a BA degree from Pomona College in perceptual psychology in 1965 (including the study of the Ganzfeld effect) and also studied mathematics, geology and astronomy there. Turrell enrolled in the graduate Studio Art program at the University of California, Irvine in 1966, where he began making work using light projections. His studies at UC Irvine were interrupted in 1966, when he was arrested for coaching young men to avoid the Vietnam draft. He spent about a year in jail. He later (1973) received an MA degree in art from Claremont Graduate University. In 2004, he was awarded an honorary doctorate by Haverford College.

In 1966, Turrell began experimenting with light in his Santa Monica studio, the Mendota Hotel, at a time when the so-called Light and Space group of artists in Los Angeles, including Robert Irwin, Mary Corse and Doug Wheeler, was coming into prominence. By covering the windows and only allowing prescribed amounts of light from the street outside to come through the openings, Turrell created his first light projections. In Shallow Space Constructions (1968) he used screened partitions, allowing a radiant effusion of concealed light to create an artificially flattened effect within the given space. That same year, he participated in the Los Angeles County Museum's Art and Technology Program, investigating perceptual phenomena with the artist Robert Irwin and psychologist Edward Wortz.

In 1969, he made sky drawings with Sam Francis, using colored skywriting smoke and cloud-seeding materials. A pivotal environment Turrell developed from 1969 to 1974, The Mendota Stoppages, used several rooms in the former Mendota Hotel in Santa Monica which were sealed off, with the window apertures controlled by the artist to allow natural and artificial light to enter the darkened spaces in specific ways.

Turrell is perhaps best known for his work in progress, Roden Crater. He acquired an extinct cinder volcano located outside Flagstaff, Arizona in 1979. Since then he has spent decades moving tons of dirt and building tunnels and apertures to turn this crater into a massive naked-eye observatory for experiencing celestial phenomena.

Although he works in the American desert, Turrell does not consider himself an earthworks artist like Robert Smithson or Michael Heizer: "You could say I'm a mound builder: I make things that take you up into the sky. But it's not about the landforms. I'm working to bring celestial objects like the sun and moon into the spaces that we inhabit." He added: "I apprehend light — I make events that shape or contain light."