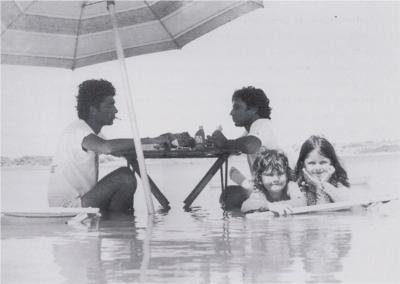 Ron Cooper (born 1943) is an American artist who grew up in Ojai, California and started his career in the late 1960s in Los Angeles. He currently resides in Ranchos de Taos, New Mexico. By 1973, he had already participated in numerous international solo and group shows with pieces in the permanent collections of the Guggenheim Museum, NY and LACMA. His work was exhibited at the La Jolla Museum of Contemporary Art, La Jolla, California, May 13-July 1, 1973. Cooper's work explores light, reflection, transparency, and color, through the medium of colored fluorescent lights, neon, and glass. In his Separator Variations series the colored fluorescent fixtures, separated by glass, reflect and appear to overlap combining the colors producing a third hue. Most of his pieces, like the Separator Variations series, demonstrate the additive nature of light, (the subtractive result of combining colors of light). His other work included environmental installations and neon focused on the same themes.

Ron Cooper began his work, art, and journey with Mezcal in 1970. Around that time he accidentally came across Oaxaca and fell in love with its people, culture, and overall spirit. After learning and working with locals, and having several attempts to bring Mezcal to the world at large, Ron opened Del Maguey as Founder and President in the 1990s. The company has become very successful as of late, as Mezcal is entering the mainstream of American bars, becoming an artisanal or craft ingredient for many creative cocktails. In recent years Ron has done dinner pairings with chefs Jose Andres, and Mary Sue Milliken appeared on CNN with Anthony Bourdain, and recently was awarded the James Beard Award for “Outstanding Wine, Beer, or Spirits Professional,” beating out Sam Calagione from Dogfish Head, Rob Tod from Allagash Brewing Company and Harlen Wheatley from Buffalo Trace Distillery.