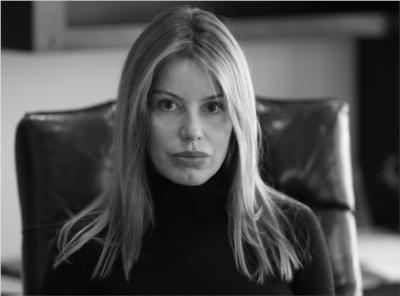 Colon is best known for meticulously creating light-activated sculptures through industrial and technological processes. She is one of the few women working in the Light and Space and Finish/Fetish movements. Recognized as a successor and legatee of California Minimalism and the Light and Space movements, Colon has exhibited her work alongside veterans of these movements such as Robert Irwin, Larry Bell, DeWain Valentine, Peter Alexander, Helen Pashgian and Mary Corse. Her use of color, shapes and internal layering is considered "assertively feminist," and "grounded in Minimalism." Her work has been compared to earlier male artists like Craig Kaufman, Dewain Valentine, Doug Wheeler, and Peter Alexander for her use of materials and light as medium; however, as pointed out in ArtForum, "Colon's labors are very much her own...Her employ of industrial materials and techniques thus structurally redoubles an earlier industry-driven technophilia, even as she eschews her predecessor's penchant for outsourcing production." Colon's technologically innovative sculptures led to her to being named one of "The Most Powerful Women in LA's Arts Scene" in June 2015, identifying her as part of the new cultural vanguard in Los Angeles. In May 2016, Colon was identified as an "Art Star" in issue 113 of Coagula Magazine, and her portrait by Eric Minh Swenson was included in the Art Star exhibition at the Museum of Art and History, Lancaster.

Colon was born in Vancouver, Canada, in 1966 to a German mother and Puerto Rican father. Her mother was a painter who studied languages and art at the University of Edmonton, Alberta, and her father was a scientist who obtained a Ph.D. in Chemistry from the Simon Fraser University, Vancouver, Canada. She was raised in San Juan, Puerto Rico since the age of one, and attended the University of Puerto Rico, graduating magna cum laude in 1987 with a BA in Economics, after receiving a 1986 Congressional Scholarship Award by the Harry S. Truman Foundation in recognition of her outstanding academic excellence. Colon moved to Los Angeles in 1987 to pursue graduate studies, receiving a Juris Doctorate degree from the Southwestern University School of Law in 1990.

Colon began her career as a painter, exhibiting abstract works from 2005 through 2011. Colon's early influences, which germinated from her Latin American upbringing in Puerto Rico, include Carlos Cruz-Diez, and Jesus Rafael Soto, amongst others. Her paintings also showed the influences of artists associated with "Light and Space" in Los Angeles such as Ron Davis and Craig Kauffman. In 2012, Colon moved away from painting into sculpture, focusing on perceptual phenomena, an interest she shares with other members of the Los Angeles-based Light and Space movement, such as Robert Irwin, James Turrell, Craig Kauffman, DeWain Valentine, Helen Pashgian, Larry Bell, Ronald Davis, Mary Corse and Peter Alexander. Colon's friendship with mentor De Wain Valentine, and the writings of Donald Judd and Robert Irwin, generated a conceptual shift in her work increasing her interest in issues of visual perception and materiality, which led to the creation of her plastic sculptures body of work.