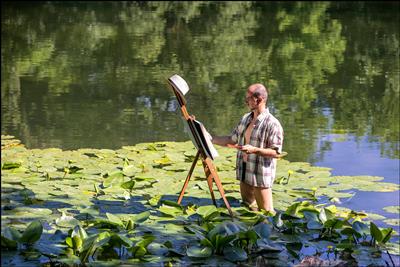 
Alfred Freddy Krupa comes from a multiethnic Silesian family of long tradition in visual arts. His family appears in archives of the International Tracing Service as the registered victims of Nazi persecution.
His grandfather and first mentor Alfred Krupa Sr.(Alfred Joseph Kruppa, Mikolow, Poland 1915 - Karlovac, Croatia/Yugoslavia 1989, related to the Oppenheim family) the former pupil of Józef Mehoffer was one of the 13 core artists of the Art of Croatian Antifascist Movement (he exhibited at the historic first Partisan exhibition held in Topusko in 1944 on the free territory of Yugoslavia) and founder of the Watercolor Biennal of Yugoslavia (BAJ,1979).
His son Mladen Krupa created the portable metal steel bunker called Kruppa-M91 used during
Croatian Homeland War, now under Croatian state protection.
According to the Eupedia Krupa belongs to the rare Ashkenazi branch of haplogroup Q and through that paternal lineage is related to J. Robert Oppenheimer, Vilna Gaon, Henry Heimlich, Tony Kushner, Anson Williams, Nicky Oppenheimer, the Piątkowski h. Pomian family and other notables.


Krupa graduated in 1995 at the Academy of Fine Arts, University of Zagreb (est. 1907 as the Royal College for Arts and Crafts (Croatian: Kraljevsko zemaljsko više obrazovalište za umjetnost i umjetni obrt). Krupa also studied Art History (non-degree research) at the University of Zagreb (1997,1998) and in 1998/99 as the postgraduate research student (The Monbukagakusho Scholarship (文部科学省奨学金, Monbukagakushō Shōgakukin)) at the Tokyo Gakugei University (東京学芸大学) or Gakudai (学大).
In 2005 Krupa finished additional art education study and has been given formal permanent title of "Professor of Drawing and Painting" by the Croatian State Institute for Education (today "Education and Teacher Training Agency"- ETTA/AZOO)


Krupa's work has attracted public and professional attention from the beginning. For the first time his name was introduced to the general public in 1990 at the then mega-popular Yugoslav weekly "Vikend/Weekend". In the same year his first solo exhibition was held. At that time Freddy (as the younger Alfred chose to be called, so as not to be confused with his mentor) painted aquarelles, following in his grandfather's footsteps (Karlovac Lexicon (pg.241, Školska Knjiga and Edicija Leksikon, 2008).


"Freddy's chromatic and formal artistic reduction followed the approach of the East, where the entire drawing is often reduced to a single continuous movement. The painted line represents the flow of the artist's thoughts and emotions at the moment. Freddy began to interpolate this with the expressionism and Art Informel of the West, and once again created uniqueness in artistic style, gaining international acceptance and recognition from the United States to China" (A.Vranković, Overcoming A Personal Holocaust, Life As A Human, Canada, 2019).