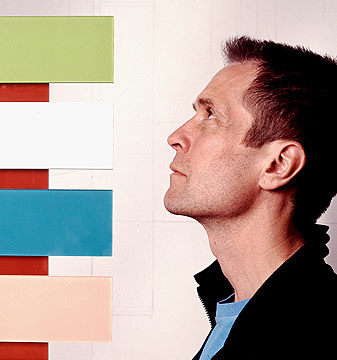 David Batchelor (born 1955, Dundee) is a Scottish artist and writer.

David Batchelor studied Fine Art at Trent Polytechnic, Nottingham (1975–8), and Cultural Theory at the Centre for Contemporary Cultural Studies, Birmingham University (1978–80). He has exhibited widely in the UK, continental Europe, the United States and Latin America; written two books, Minimalism (1997) and Chromophobia (2000), is the editor of Colour (2008) and contributed to a number of journals including Artscribe, Frieze (magazine), and Artforum. David was a member of Tate Britain Council from 2002-5, an advisory body on development and programming at Tate Britain.

He has shown work internationally in many exhibitions including the British Art Show at SNGMA in Edinburgh, Days Like These: Tate Triennial of Contemporary Art at Tate Britain, the 26th São Paulo Biennale, Extreme Abstraction at the Albright-Knox Art Gallery in Buffalo, the Folkestone Triennial in Folkestone and Color Chart: Reinventing Color, 1950 to Today at the Museum of Modern Art in New York City and Tate Liverpool. He is represented by Ingleby Gallery in Edinburgh and Galerie Leme in São Paulo.

Two of his works are held in the collection of Tate. He is the brother of Buddhist scholar and author Stephen Batchelor.