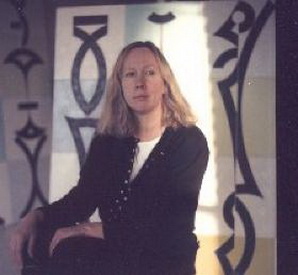 Valerie Jaudon (born August 6, 1945) is an American painter commonly associated with various Postminimal practices – the Pattern and Decoration movement of the 1970s, site-specific public art, and new tendencies in abstraction.

Jaudon has had numerous solo and group exhibitions nationally and internationally. She began her early career in New York with the group exhibition, "76 Jefferson Street," at the Museum of Modern Art in 1975, featuring artists who had lived and worked in the 1893 loft building near the East River and the Manhattan Bridge, an area on the Lower East Side which began to attract artists and musicians in the mid-1950s.

She was one of the original painters of the Pattern and Decoration movements of the 1970s. The group began exhibiting together in 1976 in "Ten Approaches to the Decorative" at the Alessandra Gallery in New York, followed by "Pattern Painting" in 1977 at PS1 in Long Island City, Queens. Subsequently, over fifty group exhibitions featuring the founding artists were held in museums and galleries in Europe and the U.S. including the National Gallery of Art in Washington, D.C., the Art Institute of Chicago, Palais des Beaux Arts, Brussels, Louisiana Museum of Modern Art in Humlebaeck, Denmark, the Neue Galerie, in Aachen, Germany, the Pori Art Museum, the Mayor Gallery in London, Modern Art Oxford, and the Hudson River Museum in Yonkers, New York.

In 2012 the "Conceptual Abstraction" exhibition of 1991 at the Sidney Janis Gallery, a survey of twenty contemporary abstract painters, organized by Carroll Janis and Jaudon, was revisited at the Hunter College Galleries in New York City and curated by Joachim Pissarro and Pepe Karmel.

Her first public project in 1977 was a ninety-foot-long ceiling mural in the INA Tower in Philadelphia, the Mitchell/Giurgola addition to the Insurance Company of North America building. The mural was executed during the period of her work with the architect Romaldo Giurgola. Jaudon was associated with the firm’s New York and Philadelphia offices from 1975 until 1980, and worked on a wide range of projects.