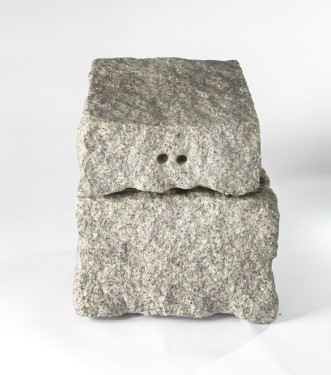 Postminimalism is an art term coined (as post-minimalism) by Robert Pincus-Witten in 1971 used in various artistic fields for work which is influenced by, or attempts to develop and go beyond, the aesthetic of minimalism. The expression is used specifically in relation to music and the visual arts, but can refer to any field using minimalism as a critical reference point. In music, postminimalism refers to music following minimal music.

In visual art, postminimalist art uses minimalism either as an aesthetic or conceptual reference point. Postminimalism is more an artistic tendency than a particular movement. Postminimalist artworks are usually everyday objects, use simple materials, and sometimes take on a "pure", formalist aesthetic. However, since postminimalism includes such a diverse and disparate group of artists, it is impossible to enumerate all the continuities and similarities between them.

The work of Eva Hesse is also postminimalist: it uses "grids" and "seriality", themes often found in minimalism, but is also usually hand-made, introducing a human element into her art, in contrast to the machine or custom-made works of minimalism. Richard Serra is a prominent post-minimalist.

In its general musical usage, postminimalism refers to works influenced by minimal music, and it is generally categorized within the meta-genre art music. Writer Kyle Gann has employed the term more strictly to denote the style that flourished in the 1980s and 1990s and characterized by:

Minimalist procedures such as additive and subtractive process are common in postminimalism, though usually in disguised form, and the style has also shown a capacity for absorbing influences from world and popular music (Balinese gamelan, bluegrass, Jewish cantillation, and so on).

For a musical style derived from minimalism, see Totalism (music).