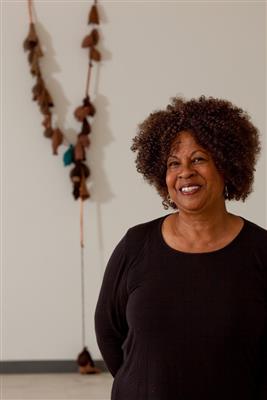 Senga Nengudi (born September 18, 1943) is an African-American visual artist best known for her abstract sculptures that combine found objects and choreographed performance. She is part of a group of African-American avant-garde artists working in New York and Los Angeles from the 1960s onward.


Nengudi was born as Sue Irons in Chicago in 1943, and following the death of her father in 1949, moved to Los Angeles and Pasadena with her mother. As a result of an existing segregated school system, Nengudi found herself in between schools, transferring back and forth between Los Angeles and Pasadena. Her cousin Eileen Abdul-Rashid is also an artist. Following her graduation from Dorsey High School, Nengudi studied art and dance during the 1960s at California State University, Los Angeles, graduating with a BA in 1967. She then spent a year studying at Waseda University, Tokyo, in the hopes of learning more about the Gutai collective. In 1967, she returned to California State University, from which she received her MA in sculpture in 1971. During college, in 1965, she interned at the Watts Towers Art Center when Noah Purifoy was the director. She also worked as an art instructor at the Pasadena Art Museum and the Fine Arts Community Workshop. She moved to New York City shortly thereafter to continue her career as an artist, and she traveling back and forth between New York City and Los Angeles frequently. She lives and works in Colorado Springs, Colorado.


Nengudi was part of the radical, avant-garde black art scenes in both New York City and Los Angeles during the 1960s and 1970s. She was a member of the Studio Z collective, also known as the LA Rebellion, that comprised African American artists "distinguished by their experimental and improvisational practice" David Hammons and Maren Hassinger, also members of Studio Z, were frequent collaborators with her work.


She worked with two galleries in particular: Pearl C. Woods Gallery in Los Angeles (owned and directed by Greg Pitts) and Just Above Midtown in New York. Just Above Midtown (JAM) was owned and directed by Linda Goode Bryant who influenced Nengudi. She has described the creative energies of working with galleries like these two that were "trying to break down the walls" for the black artist community.


In 1975, following the birth of her son and seeing the changes in her body, Nengudi began her "répondez s'il vous plait" (RSVP) series for which she is best known. Combining her interest in movement and sculpture, Nengudi created abstract sculptures of everyday objects through choreographed sets which were either performed in front of a live audience or captured on camera. The sculptures were made from everyday objects, like pantyhose, and parts were stretched, twisted, knotted, and filled with sand. The finished sculptures, originally intended to be able to be touched by the audience, were often hung on gallery walls but stretched across gallery space, evoking the forms of bodily organs, sagging breasts, and a mother's womb. For her, the use of pantyhose as a material reflected the elasticity of the human body, especially the female body. These sculptures as well as her later performance pieces involving pantyhose expressed a mélange of sensuality, race identify, body image, and societal impacts on women's bodies.