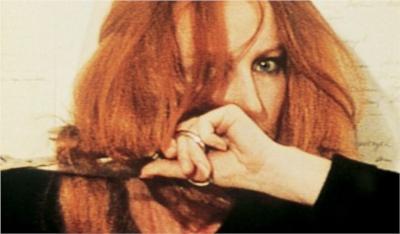 Rebecca Horn (born 24 March 1944, Michelstadt, Hesse) is a German visual artist, who is best known for her installation art, film directing, and her body modifications such as Einhorn (Unicorn), a body-suit with a very large horn projecting vertically from the headpiece. She directed the films Der Eintänzer (1978), La ferdinanda: Sonate für eine Medici-Villa (1982) and Buster's Bedroom (1990). Horn presently lives and works in Paris and Berlin.

Rebecca Horn was born on 24 March 1944 in Michelstadt, Germany. She was taught to draw by her Romanian governess and became obsessed with drawing with expression because it was not as confining or labeling as oral language. Living in Germany after the end of World War II greatly affected the liking she took to drawing. "We could not speak German. Germans were hated. We had to learn French and English. We were always traveling somewhere else, speaking something else. But I had a Romanian governess who taught me how to draw. I did not have to draw in German or French or English. I could just draw."

Horn spent most of her late childhood in boarding schools and at nineteen rebelled against her parents' plan of studying economics and decided to instead study art. In 1963 she attended the Hochschule für bildende Künste Hamburg (Hamburg Academy of Fine Arts). A year later she had to pull out of art school because she had contracted severe lung poisoning. "In 1964 I was 20 years old and living in Barcelona, in one of those hotels where you rent rooms by the hour. I was working with glass fibre, without a mask, because nobody said it was dangerous, and I got very sick. For a year I was in a sanatorium. My parents died. I was totally isolated."

After experiencing this isolation until she felt that her life was over before it had begun, she walked out of the hospital. The experience gave her a heightened sense of sensory awareness which she began to reflect upon in her early performances . She was still too ill, however, to resume life as a student or work with fiberglass and polyester. She had to take masses of antibiotics and sleep long hours to have enough energy to operate normally. She could, however, work with softer materials, and when in bed she drew with colored pencils, which are still her favorite drawing tools. She also began to slowly break out of her self-imposed isolation and began to create sculpture and strange extensions with balsa wood and cloth. "I began to produce my first body-sculptures. I could sew lying in bed." Her goal then was to quash her "loneliness by communicating through bodily forms."

Horn is one of a generation of German artists who came to international prominence in the 1980s. She practices body art, but works in different media, including performance art, installation art, sculpture, and film. She also writes poetry. Sometimes her poetry is influenced by her work, and on many occasions it has inspired her work. When Horn returned to the Hamburg academy she continued to make cocoon-like things. She worked with padded body extensions and prosthetic bandages. In the late sixties she began creating performance art and continued to use bodily extensions.