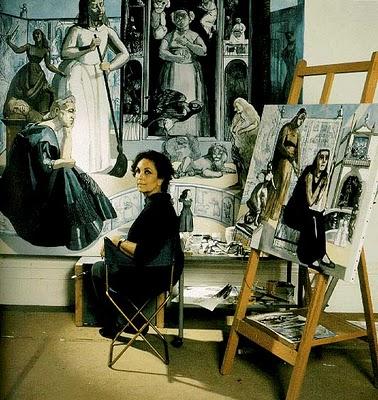 Dame Paula Rego, DBE (born 26 January 1935), is a Portuguese visual artist who is particularly known for her paintings and prints based on storybooks. Rego’s style has evolved from abstract towards representational, and she has favoured pastels over oils for much of her career. Her work often reflects feminism, coloured by folk-themes from her native Portugal.

Rego studied at the Slade School of Fine Art and was an exhibiting member of the London Group, along with David Hockney and Frank Auerbach. She was the first artist-in-residence at the National Gallery in London. She lives and works in London.

Rego was born on 26 January 1935 in Lisbon, Portugal. Her father was an electrical engineer who worked for the Marconi Company. Although this gave her a comfortable middle-class home, the family was divided in 1936 when her father was posted to work in the United Kingdom. Rego's parents left her behind in Portugal in the care of her grandmother until 1939. Rego's grandmother was to become a significant figure in her life, as she learned from her grandmother and the family made many of the traditional folktales that would one day make their way into her art work.

Rego's family were keen Anglophiles, and Rego was sent to the only English-language school in Lisbon's district at the time, Saint Julian's School in Carcavelos, which she attended from 1945 to 1951. Although nominally a Catholic and living in a devoutly Catholic country, St Julian's School was Anglican and this combined with the hostility of Rego's father to the Catholic Church served to create a distance between her and full-blooded Catholic belief. Rego has described herself as having become a "sort of Catholic", but as a child she possessed a sense of Catholic guilt and a very strong belief that the Devil was real.

In 1951, Rego was sent to the United Kingdom to attend a finishing school called The Grove School, in Sevenoaks, Kent. Unhappy there, Rego attempted in 1952 to start studies in art at the Chelsea School of Art in London, but was advised against this choice by her legal guardian in Britain, David Phillips, who had heard that a young woman had become pregnant while a student there. He suggested to her parents that The Slade School of Fine Art was a more respectable choice and helped her achieve a place there. She attended the Slade School from 1952 to 1956.

At the Slade, Rego had met her future husband, Victor Willing, who was also a student there. In 1957, Rego and Willing left London to live in Ericeira, Portugal. They were able to marry in 1959 following Willing's divorce from his first wife, Hazel Whittington. Three years later Rego's father bought the couple a house in London, at Albert Street in Camden Town, and Rego's time was spent divided between Britain and Portugal.

In 1966, Rego's father died, and the family electrical business was taken over, unwillingly, by Rego's husband, although he had himself been diagnosed with multiple sclerosis. The company failed in 1974 during the Portuguese revolution that overthrew the country's right-wing Estado Novo dictatorship, when its production works were taken over by revolutionary forces, even though Rego's family had been supporters of the political Left. As a result, Rego, Willing and their children moved permanently to London and spent most of their time there until Willing's death in 1988.