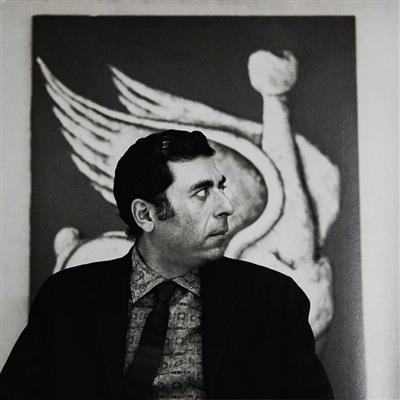 Bahman Mohassess dubbed by some as the "Persian Picasso", was an Iranian painter, sculptor, translator, and theatre director. His oeuvre comprises paintings, sculptures and collages. He was also a celebrated translator of literary works. His works are highly collected and extremely rare. He is said to have destroyed many of his own works and those that are available at auction, are quickly sought after and bought. His art work range from $50,000 USD up to $1M USD for the extremely rare pieces that are thought to have been destroyed, aside for a couple that are owned by private collectors, like his painting "Requiem Omnibus" etc. However, many of his pieces, have not been destroyed and have been kept privately by collectors. Some of his most sought after and popular paintings (among others) are "Fifi Howls from happiness" and "Requiem Omnibus" (death of Martin Luther King ) , which are supposedly owned by a private collectors.

Bahman Mohassess (Persian: بهمن محصص) (March 1931 Rasht, Iran-28 July 2010 Rome, Italy), dubbed by some as the "Persian Picasso", was an Iranian painter, sculptor, translator, and theatre director. His oeuvre comprises paintings, sculptures and collages. He was also a celebrated translator of literary works. His works are highly collected and extremely rare. He is said to have destroyed many of his own works, and those that become available at auction are now highly sought after.

Bahman Mohasses was born in 1931 in Rasht. The Mohasses house consisted of approximately 15 families who were land owners of Lahijan and were in the trade of tea and silk and lived in the Pordsar neighborhood of Lahijan. According to Hossein Mahjoobi, "All Mohasseses had strange personalities, but Bahman seemed to be the most complex and unique of them."

In his autobiographical documentary Fifi Howls from Happiness, Mohasses mentions that he is descended from the Mongols on his father's side and the Qajars on his mother's side.

At age 14 he learned painting from Habib Mohammadi, who had studied at the Russian Academy of Arts. He moved with his family from Rasht to Tehran, where he attended Tehran's Faculty of Fine Arts. During the same period he joined the "Cockfight" art and culture society (Anjoman-e Khorous Jangi), established by Jalil Ziapour, and was, for some time, the editor of the literary and art weekly "Panjeh Khoroos" (Rooster Foot). Through this period, he was part of an avant-garde artistic movement, which included his good friend Nima Yooshij, known as the 'father of modern Persian poetry'; along with Sohrab Sepehri, Houshang Irani and Gholamhossein Gharib, who were all considered progressive artists of their time. In 1954 he moved to Italy to study at the Fine Art Academy of Rome.

In 1977, he married Nezhat-al-Molook, the daughter of his father's cousin, who was a teacher in Bandar-Anzali and later became the head of the Teaching College for Women. She died of brain cancer around 1998.

He returned to Iran in 1964 and participated in Venice, São Paulo and Tehran Biennales. Mohasses directed plays, including Pirandello's Henry IV at Goethe Institute and Ghandriz Hall in Tehran. He also translated books of a number of authors, including Eugène Ionesco, Malaparte and Pirandello.

He stayed in Iran until 1968, before returning to Rome1954, where he received commissions for statutes to be placed in Tehran. Some of his public works in Iran were destroyed or damaged after the Islamic Revolution, with the artist subsequently destroying all his remaining works in Iran. He occasionally travelled to Iran and died in self-imposed seclusion in Rome in 2010.

"Irreverent and uncompromising, a gay man in a hostile world, Mohassess had a conflicted relationship with his homeland—revered by elites in the art scene and praised as a national icon, only to be censored later by an oppressive regime. Known for his iconoclastic art as well as his scathing declarations, Mohasses abandoned the country over 30 years ago for a simple, secluded life in Italy." Mohasses, unlike many of his contemporaries, did not make references to Persian artistic traditions and had a modern outlook. His paintings and sculptures depicted mythical Minotaurs and creatures out of nightmares in vast deserts of hopelessness. After the Iranian revolution of 1979 he destroyed some of his work.