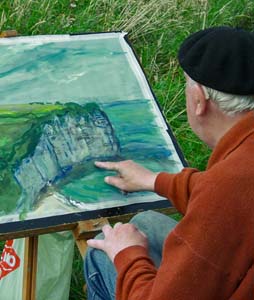 Paul Werner, painting the coast of Normandy near Petit-Dalles in 2007

Paul Werner was born in the city Arnhem, The Netherlands, close to the border of Germany along river Rhine.
At the age of 1 year he moved with his parents to the city Amersfoort where he lived till the end of the war, circa 1952.

Paul Werner went to the city Amsterdam where he would live and work for the rest of his life, till now..
In 1952 he started to folow painter lessons after still life in the studio of Fred Sieger. Werner continued to follow from 1957 - 1959 art teacher courses at the Rijksnormaal School, together with Reinier Lucassen.
Then Paul Werner was forced to quit the Rijksnormaal School, without any reason

From 1963-1964 he followed course at the art education Ateliers 63, in Haarlem; he followed there graphic art courses from art teacher Frans Verpoorten
In 1959 he continued his graphic education at the new started Grafische Ateliers in Amsterdam, especially lithography; his mentor there was the graphic artist Emile Puettmann.

Paul Werner has been his whole artistic life a typical artist of the Amsterdam art scene in those years. There he joined several artist groups like St Lukas, and exhibited with the St Lukas union several times in the Stedelijk Museum in Amsterdam.
His most important gallery was gallery Amsterdam, in the Warmoesstraat, in Amsterdam. In the Amsterdam artist organisation B.B.K. Werner was engaged with several political artistic activities.

As an painter artist Paul Werner had two sides. One side was political and engaged with the new developments of the 1960's and 70's in Amsterdam.
He expressed his engagement in a lot of political prints - in the technique of lithography, mainly black-white.
On the other side he loved to paint the landscape as painter artist, mainly in open or plein air, in gouache on paper. The places he adored most for painting in open air was the wild coast of Brittany in France.
Year after year he returned to the wild coast in the South of Brittany and painted a lot of paintings in gouache of the landscapes and seascapes there.
Paul Werner died 20 december 2018 in Laren, The Netherlands.

The Stedelijk museum Amsterdam has a collection of 15 of his lithography prints and some gouaches on paper.
The Amsterdam Municipal Archive has a collection of circa 14 of his works, with the subject: city Amsterdam.
The Museum Meermanno in The Hague acquired two of his graphic books: Hommage to Lorca and the art-book Vincent van Gogh
The royal Library in the Hague bought his graphic art book La Nueva Primavera, with poems of Lorca.
Also the Municipal Library of Antwerp possesses the book Hommage to Van Gogh.