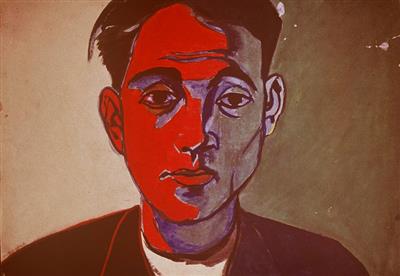 Andrzej Wróblewski (15 June 1927 - 23 March 1957) was a Polish figurative painter who died in a mountaineering accident in 1957 when he was only 29. He is recognized by many as one of Poland's most prominent artists in the early post World War II era, creating distinctly individualistic approach to representational art.

Wróblewski was born in Wilno (modern Vilnius) on 15 June 1927, the son of law professor Bronisław Wróblewski from the Stefan Batory University and the painter Krystyna Wróblewska. He showed artistic talent at a very young age. His education was interrupted by the German invasion of Poland, although he was able to attend some underground courses; his mother introduced him to the art of woodcut which he practiced from 1944 to 1946.

Immediately after the end of World War II, following the shifting of Poland's national borders, his family moved from Wilno to Kraków, where he passed the matura exams and became a student in the Painting and Sculpture Department of Poland's oldest art school, the Academy of Fine Arts, where he studied between 1945 and 1952 under Zygmunt Radnicki, Zbigniew Pronaszko (pl), Hanna Rudzka-Cybisowa and Jerzy Fedkowicz. Also between 1945 and 1948 he simultaneously studied art history at the Jagiellonian University, Poland's oldest university (and one of the oldest in the world).

Wróblewski's earliest paintings were very much Capist in spirit such as Martwa natura z dzbanem (Still life with a vase), in 1946). Early in his career, towards the end of the 1940s, he began to rebel against the dominant colorist style propagated in academic circles in Poland during this period and at the 1st Exhibition of Modern Art at Kraków in 1948 he was recognized as a painter exhibiting some original spatial forms. It was important to Wróblewski to indulge in art work that was contrary to popular techniques and style in Poland at the time creating a Self-Teaching Art School as a unit of the Association of Polish Academic Youth at the Kraków Academy of Fine Arts for young inspired painters. Its first members included painters such as Przemysław Brykalski, Andrzej Strumiłło (pl), and Andrzej Wajda. This was the first group in the history of Polish contemporary art to openly manifest against the aesthetics of the Colorism movement. The primary thesis of Wróblewski's program accented the need for art in which "aesthetic and ideological elements would be indivisibly fused."

Between 1947 and 1948 Wroblewski focused on experimentation in oil paintings and gouaches developing a unique means of expression, whilst remaining open to the influences of modern artist styles such as surrealism, abstract art, and geometric art), which in turn affected the nature of other talented artists in Kraków. His canvasses of this period frequently include geometric figures Niebo nad Gorami (The Sky over the Mountains), Niebo Niebieskie (Blue Blue Sky) in 1948; Segmenty, (1949).

Through exploration in art Wroblewski devised his own formal style, with his own artistic interpretation, revealed in one of his most famous works Executions dating from the late 1940s illustrating his heightened expressiveness and metaphorical abilities depicting real life events. These paintings depicting brutal events during the German occupation of Poland are exceptional for the intensity of feeling they provoke. The artist accomplishes this by depicting brutally deformed human figures torn into pieces; at the same time the canvasses are maintained in cold, blue-green, cadaver-like hues.