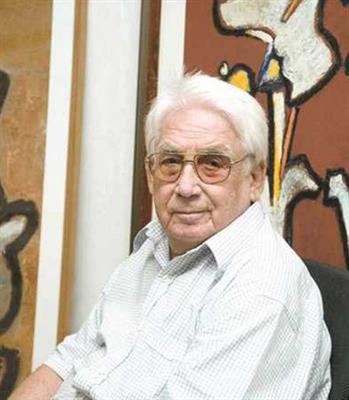 He was born in Valencia, Carabobo. He studied medicine at the Universidad de los Andes and culminated his career at the Universidad Central de Venezuela in Caracas. His work was carried out between France and Venezuela, it is an original synthesis of the cultural roots of Latin America and the latest artistic currents of modernity. His work includes painting, sculpture, prints, drawings, ceramics and tapestries. He has made over one hundred solo exhibitions and is represented in numerous public institutions and private collections around the world.

Oswaldo Vigas was born in Valencia, Venezuela in 1923.

Predominantly recognized as a self-taught painter, he also worked in architectural murals, sculptures, ceramics, prints and drawings. Vigas is one of Venezuela’s best-known painters and a seminal figure that validated the cultural heritage of the Americas, affirming the importance of revising his own Latin American roots along with a global perspective in the arts. From a very young age, Vigas had already begun showcasing his paintings and illustrations and had participated in several painting salons and exhibitions. He graduated from the School of Medicine in 1951, although he never practiced. He devoted himself exclusively to his artistic career for the rest of his life.

While studying, he continued painting and took several art classes at the Taller Libre de Artes, and attended the Escuela de Artes Plásticas Cristóbal Rojas, where he became acquainted with painters like Manuel Cabré and Pedro Ángel González, among others. His early paintings focus on the human figure – mostly a female figure – pre-announcing the theme that would remain a constant throughout his career: the witches. His works became quite gestural and he took an interest in pre-Columbian cultures and pottery. Progressively, he departed from conventional depictions as his line became visceral and concerned with pre-Columbian representation, which would mark a milestone in his works. In 1952 he received the National Visual Arts Award and had a major solo exhibition at the Museum of Fine Arts in Caracas. In 1952 he relocated to Paris, where he lived for twelve years and met Janine, his lifelong companion. He studied engraving and lithography at the École des Beaux-Arts and took open courses at the Sorbonne. While in Paris, he was commissioned to produce five mosaic murals that were to become part of the Universidad Central de Venezuela, declared a World Heritage Cultural Site by UNESCO in 2000, a great example of the total integration of art and architecture, conceived by Architect Carlos Raúl Villanueva que el artista realizó en París., with the participation of national and international artists such as Jean Arp, Alexander Calder, Wifredo Lam, Fernand Léger, Mateo Manaure, Alejandro Otero, Víctor Valera, and Victor Vasarely, among others. During most of the 1950s, his works shifted away from the human figure towards constructivism and abstraction. In 1953, he participated in the I São Paulo Biennial and in a group show at the Musée d’Art Moderne de la Ville de Paris, among other exhibitions. Between 1953 and 1958, the artist exhibited regularly in France and Venezuela. In 1954, he represented Venezuela at the XXVII Venice Biennale, and was part of the Painters of Venezuela traveling exhibition at the Pan-American Union, sponsored by the Smithsonian Institution, Washington D.C.