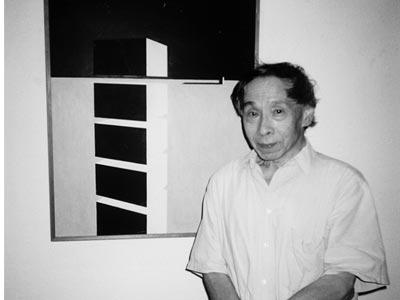 Kazuo Nakamura was a Japanese-Canadian painter and sculptor (born Vancouver October 13, 1926; died Toronto April 9, 2002) and a founding member of the Toronto-based Painters Eleven group in the 1950s.

Kazuo Nakamura was born in Vancouver, British Columbia, and was among the Japanese-Canadians interned during World War II. He studied at Toronto's Central Technical School (1948–51), and co-founded Painters Eleven. Although sharing in the other members' use of painterly abstraction, Nakamura's work was distinguished within the group by his use of simpler structures and monochromatic colours.

Influenced by fellow Painters Eleven member Jock MacDonald's interest in László Moholy-Nagy's reading of science, Nakamura was concerned with science, time and space. Nakamura described himself as seeking a "fundamental universal pattern in all art and nature" reflected in his "inner structure" paintings from the 1950s. In the 1970s and 80s he increasingly emphasized his grid paintings based on number structures, which came to involve the Pascal triangle. To Nakamura, these laboriously inscribed works were a quest for some ultimate order in the apparent chaos of the universe.

His work is part of the permanent collection at Toronto's Lester Pearson International Airport and Ontario Provincial Queen's Park Complex.

In 1983 and 1984 as part of Ontario Heritage Foundation's Firestone Collection Nakamura's work toured London (UK), Paris and Madrid. In 1991 he exhibited at the New Canadian Embassy in Tokyo and in 1992 at Ader Tajan, Art Contemporain du Canada, Espace Chapon in Paris.

In 2000 Nakamura was made an honorary fellow at the Ontario College of Art & Design and in 2004 he was the subject of the posthumous retrospective Kazuo Nakamura: A Human Measure at the Art Gallery of Ontario in Toronto. He was made a member of the Royal Canadian Academy of Arts.