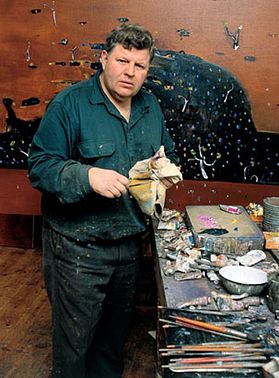 Fred Williams in front of Gorge landscape (oil on canvas, 1981) from the Pilbara series (photo by Rennie Ellis, 1981)

Frederick Ronald (Fred) Williams OBE (23 January 1927 – 22 April 1982) was an Australian painter and printmaker. He was one of Australia’s most important artists, and one of the twentieth century’s major painters of the landscape. He had more than seventy solo exhibitions during his career in Australian galleries, as well as the exhibition Fred Williams - Landscapes of a Continent at the Museum of Modern Art in New York in 1977.

Fred Williams was born on 23 January 1927 in Richmond, a suburb of Melbourne, Australia, the son of an electrical engineer and a Richmond housewife. Williams left school at 14 and was apprenticed to a firm of Melbourne shopfitters and box makers. From 1943 to 1947 he studied at the National Gallery School, Melbourne, at first part-time and then full-time from 1945 at the age of 18. The Gallery School was traditional and academic, with a long and prestigious history. He also began lessons under George Bell the following year, who had his own art school in Melbourne. This continued until 1950. Bell was a conservative modern artist but a very influential teacher.

Between 1951 and 1956, Williams studied part-time at the Chelsea School of Art, London (now Chelsea College of Art and Design) and in 1954 he did an etching course at the Central School of Arts and Crafts. He lived in a South Kensington bedsit and subsidised his art practice by working part-time at Savage’s picture framers. Williams returned to Melbourne in 1956, when his family was able to send him a cheap ticket aboard a ship bringing visitors to the Melbourne Olympics.

After mainly working with figures in early paintings and etchings, he began painting landscapes after returning to Melbourne in 1957, which remained the major theme in his art.

While learning etching and printing in London, he produced vivid caricatured sketches of contemporary London life. It was during this period that he established his method of reworking the same motif a number of times in a number of mediums and very often over a number of years.

As an artist concerned with form over subjectivity, Williams' approach struck a jarring note against the unity of many of his close associates such as John Brack, Arthur Boyd and Charles Blackman, the authors of the famous ‘Antipodean’ manifesto of 1959. Williams' work was excluded from their major exhibition. As heirs to the expressionist tradition, the Antipodeans lauded a spontaneous, improvised approach to painting and saw the function of art as vested in its expressive potential. They had little time for - and, in fact, denounced - the 'new' art emerging from Europe, the influences which were increasingly informing Williams' development.

On his return to Australia, Williams saw the aesthetic potential of the Australian bush in its inherent plasticity. His interest in finding an aesthetic 'language' with which to express the very un-European Australian landscape. This was grounded in establishing a pictorial equivalent to the overwhelmingly vast, primarily flat landscape, in which the traditional European relationship of foreground to background breaks down, necessitating a complete re-imagining of compositional space. In this, Williams looked to the approach taken by Australian Aboriginal artists.