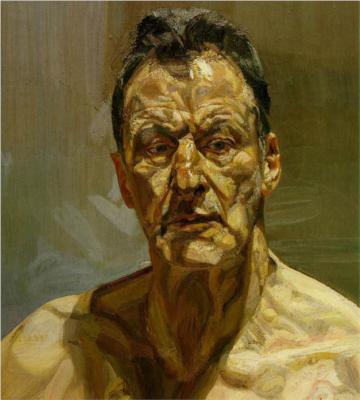 Lucian Freud was a British artist, famous for his portraits and self-portraits painted in an expressive neo-figurative style. He was born in Berlin, the grandson of the revolutionary psychologist Sigmund Freud, and the son of an architect Ernst Freud and an art historian Lucie Brasch.

Freud’s representation in public was corresponding to the image of bohemian artist. Quite unruly to all the authorities, he was expelled from a few schools at an early age, and later on, his reckless behavior was said to be the cause of the fire in one of the schools. He drew
attention to himself wherever he went with his companion - a pet hawk on his wrist or shoulder. Freud used to spend days going to diners, gambling, and spending time in the company of the British aristocrats, socialites, and artists. Among them was the painter Francis Bacon, who was greatly affecting Freud’s work - until an end of their friendship, which was inevitable having in mind their characters and a lack of respect for each other’s later work.

Freud belonged to the School of London, a group of artists dedicated to figurative painting. This approach was highly controversial to an art world which, at that time, was dominated by abstraction. Compared with other prominent painters of that school - David Hockney, or Francis Bacon - Freud was stylistically a more conventional artist. He painted people without idealizing them, emphasizing sexual characteristics and imperfections of a human body. In his paintings, he used to describe unease or somehow disturbed mental conditions of specific individuals, but also of humans in general.

Influenced by early 20th-century Expressionism, Freud’s wide, textured strokes evoke the art of Edvard Munch and Egon Schiele. His anthropomorphic depictions of objects such as chairs, shoes, etc., as well as his tilted perspective, reminds us of Vincent van Gogh’s style. By the end of 1960s, Freud’s strokes became heavier and more layered. His style changed towards recognizable expressive naked portraits, which represented deformed and unpleasant bodies. Later on, during the 1980s and 1990s, when he became increasingly popular, Freud made portraits of many famous subjects - an art critic Martin Gayford, an artist David Hockney, and the British Queen Elizabeth II. Freud is also famous for his self-portraitists which he painted obsessively. He had been making them persistently for over six decades, which reminds us of the tradition of Rembrandt and Schiele. His self-portraits show deep introspection, detailed analysis of his facial expressions, and the emotions behind them.

Once he established his recognizable style, Freud didn’t change it until the end of his artistic career. His long and tiring sessions with his sitters could be compared to the psychoanalytic practice of his grandfather. Freud challenged conventions of portraiture and inspired a new generations of painters, such as John Currin or Eric Fischl.

Lucian Michael Freud (/ˈljuːsiən ˈfrɔɪd/; 8 December 1922 – 20 July 2011) was a British painter and draftsman, specializing in figurative art, and is known as one of the foremost 20th-century portraitists.

He was born in Berlin, the son of Jewish architect Ernst L. Freud and the grandson of Sigmund Freud. His family moved to Britain in 1933 to escape the rise of Nazism. From 1942-43 he attended Goldsmiths College, London. He enlisted in the Merchant Navy during the Second World War.

His early career as a painter was influenced by surrealism, but by the early 1950s his often stark and alienated paintings tended towards realism. Freud was an intensely private and guarded man, and his paintings, completed over a 60-year career, are mostly of friends and family. They are generally sombre and thickly impastoed, often set in unsettling interiors and urban landscapes. The works are noted for their psychological penetration and often discomforting examination of the relationship between artist and model. Freud worked from life studies, and was known for asking for extended and punishing sittings from his models.

Born in Berlin, Freud was the son of a German Jewish mother, Lucie (née Brasch), and an Austrian Jewish father, Ernst L. Freud, an architect. He was a grandson of Sigmund Freud, and elder brother of the broadcaster, writer and politician Clement Freud (thus uncle of Emma and Matthew Freud) and the younger brother of Stephan Gabriel Freud.

The family emigrated to St John's Wood, London, in 1933 to escape the rise of Nazism. Lucian became a British subject in 1939, having attended Dartington Hall School in Totnes, Devon, and later Bryanston School, for a year before being expelled due to disruptive behaviour.

Freud briefly studied at the Central School of Art in London, and from 1939 to 1942 with greater success at Cedric Morris' East Anglian School of Painting and Drawing in Dedham, relocated in 1940 to Benton End, a house near Hadleigh, Suffolk. He also attended Goldsmiths' College, part of the University of London, in 1942–43. He served as a merchant seaman in an Atlantic convoy in 1941 before being invalided out of service in 1942.

In 1943, the poet and editor Meary James Thurairajah Tambimuttu commissioned the young artist to illustrate a book of poems by Nicholas Moore entitled The Glass Tower. It was published the following year by Editions Poetry London and comprised, among other drawings, a stuffed zebra and a palm tree. Both subjects reappeared in The Painter's Room on display at Freud's first solo exhibition in 1944 at the Lefevre Gallery. In the summer of 1946, he travelled to Paris before continuing to Greece for several months to visit John Craxton. In the early fifties he was a frequent visitor to Dublin where he would share Patrick Swift's studio. In late 1952, Freud and Lady Caroline Blackwood eloped to Paris where they married in 1953. He remained a Londoner for the rest of his life.

Freud was part of a group of figurative artists later named "The School of London". This was more a loose collection of individual artists who knew each other, some intimately, and were working in London at the same time in the figurative style (but during the boom years of abstract painting). The group was led by figures such as Francis Bacon and Freud, and included Frank Auerbach, Michael Andrews, Leon Kossoff, Robert Colquhoun, Robert MacBryde, Reginald Gray and Kitaj himself. He was a visiting tutor at the Slade School of Fine Art of University College London from 1949 to 1954.